There aren’t a whole helluva lot of good things one can say about September 11th, speaking of the calendar date itself. The anniversary of the attack on our nation, by definition, invokes sad and ugly memories interspersed with images of heroism and sacrifice by those who responded in both and the Pentagon on that day in 2001. Be that as it may, I’m grateful that both the McCain and Obama campaigns declared a moratorium on politics yesterday, at least where the principals were concerned. Yesterday was relatively free of the increasingly absurd point/counterpoint sound-bite politics that dominated the first part of this week. And I’m grateful for that.

Our pundits didn’t seem to let up all that much, though. Much is being made today of Charlie Gibson’s “exclusive” interview with Governor Palin, and much of the comment is coming from our Dear Friends on the Left who are in full-rant mode, seeing what they want to see and twisting words and meaning to fit the narrative… as they see it, or prefer to see it. So… yesterday was “game on” and BAU for a lot of folks. And that’s sad.

But… one of the better things I’ve read today comes from Peggy Noonan, writing in today’s WSJ. Excerpts:

After the past 10 days, it is not remarkable that Mr. McCain has caught up with Mr. Obama. It is amazing that Mr. Obama is still roughly even with Mr. McCain.

There is no denying that Mr. Obama is in a bad place, that he must now be considered the underdog, that he's wearing Loser-Glo. The slide started with the Rick Warren interviews in August, just as was starting to pay attention. Verdict? McCain: normal. Obama: odd.

Then Mrs. Palin, and the catastrophe of the Democratic and media response to her. Books will be written about this, but because it's so recent, and so known, we're almost not absorbing how huge it was, and is. Here was the central liberal mistake: They used the atom bomb just a few days in. They used it so brutally, and yet so ineptly, in a way so oblivious to the true contours of the field, that the radiation blew back over their own lines. They used it without preliminary diplomatic talks, multilateral meetings or Security Council debate. They just went boom. And it boomeranged.

The atom bomb was personal and sexual perfidy, backwoods knuckle-draggin' ma and pa saying, Tell the neighbors the baby's ours. Then the ritual abuse of the 17-year-old girl. Then the rest of it—bad mother, religious weirdo. (On this latter it must be noted that Mrs. Palin never told a church that the war was God's will; she asked them to pray that it was God's will. It wasn't the sound of Republican hubris, it was the sound of Christian humility: We can't know the mind of God, we can only pray we are in accord with it.)

All of this was unacceptable to normal Americans. They experienced it as the town gossip spreading rumor and slander before the new neighbor even got to put down her bags. It offended the American sense of fairness. And—it still lives!—gallantry.

Most crucially, the snobbery of it, the meanness of it, reminded the entire country, for the first time in a decade, what it is they don't like about the left. Really, had forgotten. Mr. Obama's friends reminded them. Unforgettably.

Yep. What she said. And Ms. Noonan has more… in the way of amplification and interpretation, at the link.

Apropos of not much… I’m posting the following excerpt from Brit Hume’s Special Report panel discussion on this past Tuesday’s ludicrous “lipstick on a pig” tempest in a teapot, but only to fulfill a promise I made during some heated discussion in comments over at Blog-Bud Morgan’s place. So, without further ado, here it is:

KRAUTHAMMER: Dissertations will be written on the "pig in lipstick" incident. But clearly Obama had no intention of maligning her or referring to her.

However, something happened after he said it. The audience stood up and cheered and stomped, meaning the audience interpreted it as a backhanded swipe at Palin. He didn't intend it, I'm absolutely sure, and perhaps at the time, given the audience reaction, he should have said, "oh, no —

KRAUTHAMMER: Exactly. "I wouldn't imply that." Or perhaps he was enjoying the reaction. Or perhaps he just isn't as quick as you expect him to be, although to think of that on the spot and to imagine what it is going to cause is pretty hard to do.

The McCain ad is clearly a cheap shot. However, in their defense, the Democrats spent a half a year attacking McCain as a man who wanted to continue the war in for 100 years, which was a gross lie about his position.

And if the Democrats are going to play a dirty on an issue as serious as the war, I give the McCain camp a slight amount of leeway on playing loose on lipstick and pigs.

I won’t repeat what I said… at some length… at Morgan’s House. Except to say I’m very disappointed that the McCain campaign has donned the mantle of The Perpetually Offended. That’s the Democrat’s shtick. We… the conservatives… are supposed to be the adults in the room here, and I would expect us to act accordingly. But I agree with Mr. Krauthammer, to a point. I’m willing to cut the McCain campaign some slack over this tactical error. My viewpoint seems to be in the minority, though, amongst my fellow-travelers. Such is the danger of being a moderate in an extreme world.

I’m pretty low and slow, personally speaking… still relatively deep in the process of recovering from Wednesday’s surgery. I find it interesting that our weather has mirrored my physical state: yesterday was gray, overcast, and cloudy until late in the afternoon, at which point the bottom sorta fell out. We got over an inch of rain last evening… and while that probably doesn’t sound like much to those of you who live in more temperate climes, it’s a lot in a single sitting for The High Plains of New Mexico. The upside is our temps have been moderate… we’re talking low 70s… and the wind has, too. As I said: the weather fits my mood and physical being.

But, I’m not all that bad… all things considered. I don’t have a hurricane bearing down on me. Ike looks like it’s gonna kick the livin’ Hell out of and maybe even , too. This is a BIG storm, to say the very least.

More Tales From The Front… excerpts from e-mail conversations with SN1:

This place is actually a little slow right now. Groundhog day...my routine seems to be I get up at 0300, drink coffee, head to the gym between 0400-0430 and lift for a little while, or run a couple of miles. Quick stop by the chow hall for a "to-go" breakfast I eat at my desk. Then it's review a slideshow my guys work for me, make changes, 0800 meeting then just about nothing until lunch. I review another slideshow at 1500 for the 1600 meeting.

I've got a couple of additional duties, but the SMSgt and I are primary/alternate (and vice versa) for vehicles and security. He's sharp. Just about the time I start to work something, he's already working it. Makes my life a little TOO easy. But we'll find our stride soon.

Here's the contrast to the last pic of me at the desk...I couldn't stand it and had to clean the whole damn office!

I feel much better about it...

Ah… plus ça change and all that, concerning the comment about the Senior Master Sergeant Buck works with. That’s what we NCOs do, ya know… work the Boss’s problems. And I knew it would only be a matter of time before Buck got things shipshape in his personal environment. It’s in the genes, ya know. Here’s the new workspace: 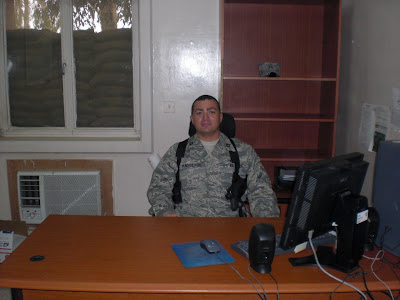