There’s more comment than you could possibly stand on memeorandum today about yesterday’s Supreme Court decision on the Second Amendment. I think Althouse and Volokh (and Volokh, again) have the best takes, but your mileage most certainly may vary. Pick and choose, at your leisure.

The best thing I’ve read today… so far: “Cheer up. We're winning this War on Terror; Al-Qaeda and the Taleban are in retreat, the surge has worked in Iraq and Islamism is discredited. Not a bad haul.” That’s the title to a piece by Gerard Baker in today’s Times (). Mr. Baker’s lead grafs:

"My centre is giving way. My right is in retreat. Situation excellent. I shall attack!”

If only our political leaders and opinion-formers displayed even a hint of the defiant resilience that carried Marshal Foch to victory at the of the . But these days timorous defeatism is on the march. In setbacks in the Afghan war are greeted as harbingers of inevitable defeat. In , large swaths of the political class continues to insist is a lost cause. The consensus in much of the West is that the War on Terror is unwinnable.

And yet the evidence is now overwhelming that on all fronts, despite inevitable losses from time to time, it is we who are advancing and the enemy who is in retreat. The current mood on both sides of the , in fact, represents a kind of curious inversion of the great French soldier's dictum: “Success against the Taleban. Enemy giving way in . Al-Qaeda on the run. Situation dire. Let's retreat!”

Since it is remarkable how pervasive this pessimism is, it's worth recapping what has been achieved in the past few years.

And the recap is good. Most EIP readers will nod their heads north and south while reading this piece because we know the things Mr. Baker enumerates are true, particularly this:

The second great advance in the War on Terror has been in . There's no need to recapitulate the disasters of the US-led war from the fall of Saddam Hussein in April 2003 to his execution at the end of 2006. We may never fully make up for three and a half lost years of hubris and incompetence but in the last 18 months the change has been startling.

The “surge”, despite all the doubts and derision at the time, has been a triumph of military planning and execution. Political progress was slower in coming but is now evident too. The Iraqi leadership has shown great courage and dispatch in extirpating extremists and a growing willingness even to turn on Shia militias. is more peaceful and safer than it has been since before the British moved in. Despite setbacks such as yesterday's bombings, the streets of 's cities are calmer and safer than they have been in years. Seventy companies have bid for oil contracts from the Iraqi Government. There are signs of a real political reconciliation that may reach fruition in the election later this year.

I find it oh-so-interesting that The Obamanon is still running on a platform that highlights “ending the war.” He also refuses to acknowledge the progress that’s been made during the past 15 ~ 18 months and continues to focus on “George Bush’s failed policies.” Obama might be correct if he’s speaking of the earlier missteps and outright bad decisions made by the administration during the war’s early days and those decisions, viewed with the luxury and clarity of hindsight, really DO look abysmal. But that was then, this is NOW. The president changed his strategy and the results speak for themselves, as Mr. Baker and many others have noted. Except for those on the Left, who would rather change the subject at this point in time. As far as I can tell, Obama and his supporters still think withdrawal and defeat are our best options.

This, of course, is yet another reason NOT to vote for The Obamanon… unless you really believe it’s in the best interests of the to concede the war in to al Qaeda. I don’t. And I don’t believe the majority of Americans do, either. 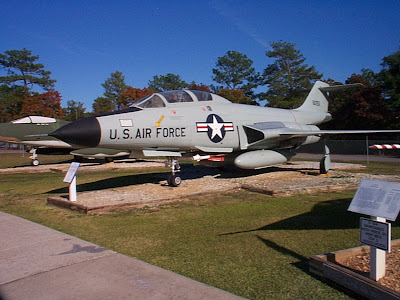 Today’s Pic: An F-101 Voodoo interceptor, sitting quietly on the grounds of the Air Force Armament Museum at Eglin AFB in the Florida Panhandle. I had a “close encounter” with an F-101 back in the day… an encounter that left me jes a lil bit wobbly in the knees. I was lucky I didn’t have to go home and change my pants, actually.

(First-generation digital pic taken in November of 1999. The usual, customary, and reasonable disclaimers about quality apply.)