Some folks would be embarrassed by this…

I scored a Far Out
95% on theQuiz by SheGoddess: Quick Weight Loss
But not me. Hey! Those were my salad days, dontcha know? Didn’t we just Disco-Down and all, even though it was done badly, for the most part? And I’m especially proud of the fact I remembered most of this krep even though I haven’t heard (nearly all) it since it was in its Top-40 heyday. I mean, c’mon: “The Bay City Rollers?”
―:☺:―
In health news… I survived the morning quite well, thank you. Dr. Thompson arrived around 0745 hours this morning and we made the brief drive to his office whereupon we immediately got down to business with little or no time wasted. The first order of business was making me comfy in the Big Chair, along with a couple of blankets to ward off the hyper-active air conditioning’s chill. (Brief digression: I’m glad I’m typing this in MS-Word, coz every third word is a typo. No shit. I should take a screen-shot for your amusement.) The second order of business was administering Massive Quantities of Good (no: Great!) Drugs, in multiple oral installments of some sort of magik powder, left to dissolve under my tongue… so many installments that I lost count, actually. Which is a semi-good thing, because the third order of business was trying to extract blood from my notoriously rolling veins. The Good Doctor and staff gave up after six attempts, three in each arm. I should take pics of the bruises in my arms for all y’all, but I’ll spare you. 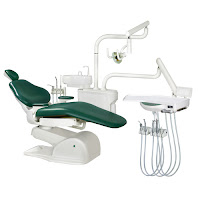 So. We’re up to about 0845 hrs. in this narrative and I don’t remember very danged much from that time on until 1400 hrs, aside from hazy recollections of various commands, such as “turn towards me,” and “open wider.” I find that very, very strange. “Semi-conscious” would be an exaggeration, because I wasn’t. I was, for all intents and purposes, waaay out there in . Just in case you’re wondering: no dreams, mild, wild, or otherwise. Just what would pass for a deep sleep. And that’s a good thing, in and of itself, as I slept oh-so-fitfully last night. The five milligrams of diazepam I was given to take before bed last evening didn’t work worth a damn. I suspect the dosage was too low, ten milligrams might have done the trick. So, to cut back to the chase, I was more than ready to go back to sleep while Dr. Thompson sliced and diced to his heart’s content…and my better oral health.
I was awakened oh-so-gently just a little after 1400 hrs with a carton of apple juice and a protein shake, both of which I scarffed downed like someone who hadn’t eaten or drank a thing for a week. Dr. Thompson and staff put me in a wheelchair after I finished off the light snack, wheeled me out the Doctors car, and he drove me home. We arrived around 1500 hrs., whereupon I went immediately to bed and slept the sleep of the just for four hours straight. I might still be asleep yet, had not SN1 made the de rigueur “are you OK” call just after 1900. I mumbled something to the effect of “yeah, I’m fine” and don’t recall saying much of anything else, other than “It’s OK!” when SN1 launched into profuse apologies for awakening me. Which: was actually a good thing. Coz it made me realize I was hungry… Capital “H” hungry. 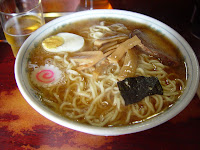 I rolled my tired ass out of bed and made a double bowl of ramen with two poached eggs and crumbled cheese in the mix as accompaniments (and one could only wish MY ramen looked as good as that in the illustration!). Not chicken soup, to be sure, but close enough for gub’mint work. It went down easy and tasted wonderful.
That was well over an hour and a half ago. SN2 has called in the meantime and we had a brief chat. The rest of time has been spent attempting to pound out this worthless batshit of a post, two-thirds of said time spent backspacing or otherwise correcting the dreaded squiggly-red underlined words. And you know how spell-check is, Gentle Reader. Words that are spelled correctly yet used inappropriately will make the cut. So: caveat emptor. But remember: I’m writing while on drugs. Great Drugs, with a most amazing sort of longevity, too.
Committed to the Inter-tubes by Buck on 5/20/2008 10:06:00 PM