Checkin' In... and Not Much Else

I’m alive and pretty well, all things considered. There are a couple of reasons for that, first and foremost being the prescription-strength Motrin. Secondly… and much more importantly... I’m being fed extremely well thanks to Jenny, who stopped by very early this afternoon and dropped off 96 ounces of piping hot chicken soup and a large loaf of banana bread. Both are delicious, and that’s today’s understatement. The banana bread has been a bit of a challenge, what with trying to keep crumbs and such out of my stitches. But challenges are placed in front of you to be overcome…so I did.

I sure as Hell haven’t felt like cooking today and you’ve been a life-saver, Jenny. Thank you oh-so-much!
―:☺:―
We’ve pretty much “gone dark” where communication with the outside world is concerned, outside of checking e-mail a couple of times today and quickly scanning the hockey news. I’m amazed at my capacity for sleep these past 36 hours or so. Case in point: item Number 122 on that ol’ list of “150 things” in my side-bar states:
122. Slept for more than 30 hours over the course of 48 hours (bold meaning I have the tee shirt)
I’m closing in on that and have been horizontal a whole helluva lot more than I’ve been vertical in the last 36 hours, anyway. One interesting (to me) side effect to the surgery is my face is pretty swollen on both sides, but on me that’s an improvement. I’ve lost so much weight in the last year that my face has become very gaunt looking, ergo: the swelling is a substantial improvement… in that I look pretty “normal” now. No pics, though, Gentle Reader. I don’t wanna scare the horses, as noted elsewhere on the blog. 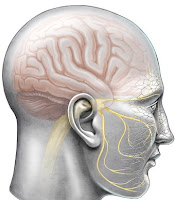 I’ve also noticed I have somewhere between 12 and 16 stitches in my mouth… and that would be an educated-guess, based on feeling around with my tongue. OK, so here I am, on prescription-strength painkillers and sleeping all day and half the night about 36 hours removed from the event. Just to keep things in perspective: Kris Draper took a puck to the mouth during Monday night’s game in Dallas (which, coincidentally, caromed into the net for the Wings’ first goal but cost Draper six stitches and three dislodged teeth), went into the locker room, got stitched up, and was back out on the ice in the same period. He might have missed five or six shifts, at most.
Have I ever told you hockey players are tough, Gentle Reader? As for me? Not so much.
―:☺:―
Speaking of hockey… here’s a good article that touches on my hockey roots by Paul Kukla (proprietor of the ‘net’s BEST hockey blog), writing at NHL.com:
Let’s address the Pittsburgh Penguins and I will say it here first, you won’t be hearing any negative chants addressed at players like Sidney Crosby or Evgeni Malkin. fans cheer for their team and are above degrading the opposition. fans know their hockey and respect the game too much to do that. Besides, Sidney Crosby reminds us of a young Steve Yzerman. Same pattern of play, same attitude towards winning. We are just hoping goes through the growing pains that Stevie did, thus delaying raising the Cup over his head for at least another year.
[…]
Now I am not going to break down the Wings roster for you. I am taking a different approach today and will officially welcome you to the Metro Detroit area. I ask you to forget all the negative things you have read and heard about Motown. Sure there are areas you want to avoid, just like every large city in the world. Instead I will point out how the folks in will welcome you with open arms. We are a hard working bunch, and although this area is suffering through a down-turn in the automotive industry, we still are trying to keep our heads above water. Approach us, talk to us, we don’t bite and want to talk hockey with you and get your feelings on our game.
Michiganders love hockey, we love that is all that is good about the sport. It is in our blood and we have been playing in the NHL since the mid-1920’s. Our father’s father passed the game on to us. Our mother’s know the game too. We appreciate the special talents each and every NHL player has. We are amazed and hypnotized by the action on the ice and we feel part of the Detroit Red Wings family. Plain and simple, we are hockey fans.
Yep, Gentle Reader…this is how I became a hockey fan. Spending ten years in Deetroit will do that to ya…like it or not. But you most likely would love the game once you fell into the right sort of crowd. I’m not that much of a weird-o, ya know.
Committed to the Inter-tubes by Buck on 5/21/2008 10:21:00 PM