SN2 sent along a couple of links this morning, the first of which is a USAF document entitled “50 Cyber Questions Every Airman Can Answer,” written by Dr. Kamal T. Jabbour, ST (Senior Scientist, Information Assurance). The document is available here, in a 324Kb pdf. You might also want to check out the web site that hosts the document (Cyber Security Boot Camp)…if you’re into this sort of thing. You’ll also note the domain is “.com” and not “.mil,” making this site an unofficial USAF web site…even though it’s done up using the official USAF web site template. And all this just by way of introduction!

I went off the rails a couple of years ago when USAF revised its official mission statement. I’ll quote myself here:
So, I read over at The Officers Club (ed: dead link. The O Club is now OpFor.) that the USAF has a new mission statement, to wit:
The Air Force changed its mission statement yesterday. The old MS reads:
The mission of the Air Force is to is to defend the through control and exploitation of air and space.
The new mission reads:
The mission of the Air Force is to deliver sovereign options for the defense of the and its global interests -- to fly and fight in Air, Space, and Cyberspace.
I'll begin with the only good thing about the new mission statement: at least The Management incorporated the old, unofficial mission statement: “To Fly and To Fight.” So much for the good stuff.
Let's begin the rant.
And rant I did…particularly about incorporating the word “cyberspace” into the new mission statement. That word still irritates me for some unknown reason, but I’m a lil less irritated after reading the following (excerpted from the “50 Questions” document):
2. What is Cyberspace?
Author William Gibson coined the term cyberspace by combining cybernetics and space into the term cyberspace in his 1982 story “Burning Chrome” and popularized it is his 1984 novel Neuromancer. Gibson described cyberspace as “a consensual hallucination experienced daily by billions... A graphic representation of data abstracted from banks of every computer in the human system. Unthinkable complexity. Lines of light ranged in the nonspace of the mind, clusters and constellations of data.” 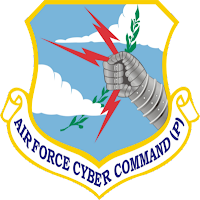 In the minds of many, cyberspace became synonymous to the Internet. In September 2006, the Joint Chiefs of Staff endorsed a definition of cyberspace as “a domain characterized by the use of electronics and the electromagnetic spectrum to store, modify and exchange data via networked systems and associated physical infrastructures."
We dissect this definition to derive the scientific basis of its intent. The word “domain” instead of “environment” carries legal implications under the laws of armed conflict. “Electronics and the electromagnetic spectrum” refer to the wave-particle duality of radiation which, when modulated with information, creates a signal. “Data and networked systems” refer to digital information and application programs, and the computers and networks on which they exist, in other words data and applications, at rest and in motion.
For warfare purposes, we derive a working definition of cyberspace as “a domain in which signals hold at risk intelligent systems.” This definition recognizes three components to cyberspace: (1) the “effectors” encompass a broad range of signal-borne threats, analog and digital; (2) the “medium” enables effectors to access the targets, wired and wireless, hardware and software; and (3) the “targets” include weapons and systems that use computers or networks. This working definition of cyberspace effectors is consistent with Department of Defense Information Operations (IO) Security Classification Guide that excludes from consideration as IO weapons those conventional weapons that produce IO effects.
Perhaps I’m irritated with the term “cyberspace” because I’m one of those “many” who conflate the term with the internet. Another possible reason is I rarely…like: NEVER…heard an Information Technology (IT) professional use the term back in my day. I’m not talking about sysadmins, UNIX geeks, or coders…the lower level guys who make things work…I’m talking about senior IT people, decision-makers such as info systems architects and CIOs. Those guys never used the term “cyberspace.” And finally… I’m supremely irritated because I don’t have an alternative to the term. There might not BE an alternative.
(Full disclosure: marketing types used “cyberspace” extensively, which is yet another reason I dislike the term. Mainly coz the marketing types Don’t Know Jack about technology…their mission is to flog stuff… and are therefore very sneer-worthy. And sneer at them I did. Oh, yes.)
But back to my point: I’m less irritated with the term cyberspace today, and less irritated with the USAF mission statement. Thanks for that, Sam.
And finally: I recommend you scan the linked pdf document, even if you’re not a geek or a military type. There are definitions and brief discussions about things every user of these here inter-tubes should know… things like phishing, viruses, worms, denial of service attacks, and so on. Knowledge IS power, Gentle Reader.
―:☺:― 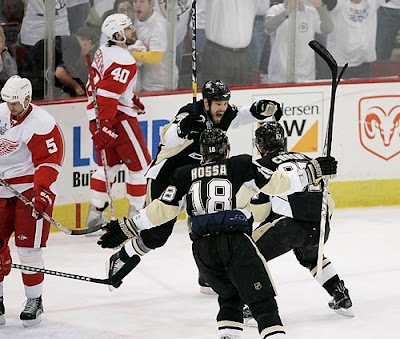 Detroit Red Wings defenseman Nicklas Lidstrom and Henrik Zetterberg skate away as the Pittsburgh Penguins left wing Jarkko Ruutu (facing) and Marian Hossa celebrate Sidney Crosb's goal during the first period.
John T. Greilick / The News
Well. It looks like we have a series that’s beginning to match all the hype that preceded the Finals. Pittsburgh won last night by a score of 3-2, and the game was close. Yeah, the Pens got lucky a couple of times last night. The luck began late in the first period with a bad outlet pass by Brad Stuart that hit Zetterberg’s skate and bounced right on to Hossa’s stick, who shot the puck only to have the blocked shot bounce right to Crosby who banged it into the net. Goal… after 137+ minutes of shut-out hockey. And then the Pens’ Adam Hall put the winner in the net off Ozzie’s ass…literally. Hall shot (if one can use that term) from behind the net, the puck hit Ozzie in the butt and bounced into the net. That, folks, was the winning goal. But hockey is like that. Sometimes you get the bounces, sometimes you don’t. got ‘em last night. The Wings helped, too… the first goal came on a VERY uncharacteristic bad clearing pass and the winning goal happened because Ozzie was out of position, in part.
So. The Pens played with a lot more fire last night and, in the words of David Shoalts, the Globe and Mail’s hockey reporter:
It was a physical, punishing match — a far better spectacle than the first two games of the series when the Penguins were out of contention early.
True, that. Last night’s game was MUCH more entertaining than the first two. With the exception of the final score, of course.
So…am I worried? Not at ALL. The Wings still outshot the Pens, 34-24. Outhit ‘em, too…at 34-31…and took fewer penalties. I still think the Wings are the better team. Did I expect a sweep? No. Was I hoping for one? Sorta. Do I think the Wings will prevail? Yes. That was a stupid question. Next?
“Next” is Saturday night, actually. I think the Wings will win that game in a big way. Just a feeling I have, Gentle Reader…just a feeling.
Update, 5/30/2008: Blog-Bud Barry links to an article in National Journal about China, hacking, cyber-war, and widespread power outages in the US. The article gives favorable mentions to USAF's Cyber Command and to USSTRATCOM's efforts in this space. (You listening, Sam?) Well worth your time, if you're so inclined.