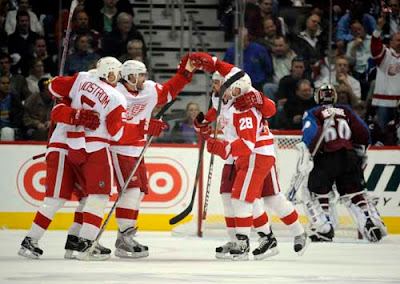 Red Wings Nicklas Lidstrom (5) celebrates Pavel Datsyuk's (13) goal in the second period with Henrik Zetterberg (40), Tomas Holmstrom (96) and Brian Rafalski (28) as Colorado goalie Jose Theodore skates away dejected. (caption and photo: News)
Two… out of 148. That’s the number of teams that have come back from a 0-3 deficit in the Stanley Cup playoffs. Ever. From the Rocky Mountain News:
So, for now, the Avalanche will just try to keep the postseason going with a win Thursday night at the instead of thinking about the prospect of joining the 1975 New York Islanders and 1942 Toronto Maple Leafs as the only teams in Stanley Cup playoff history to claim a series after dropping the first three games.
"We have to win one game," captain Joe Sakic said Tuesday night after the Avalanche's 4-3 loss. "Just keep your heads up and try and get that game and then you never know . . . see what happens. We can only worry about one thing at a time.
"They've got a great hockey team. Definitely they deserve to be up 3-0 the way the series has gone. They've outskated us, outworked us. We didn't quit, we battled back. But it wasn't enough. Hopefully, next game we can find a way to win it and at least extend it and get some momentum."
Interestingly enough, fans in and are singing the same sad song as those in the . The Rangers are down 0-3 to the Pens, who have been perfect in the playoffs so far… that would be 7-0, what with sweeping the Sens in the first round and winning all three so far against the Rangers. And ! How ‘bout them Stars? The Stars took second-seeded to the brink last night, winning a thriller in OT…the second overtime game of the series. No one, and I mean NO one, saw this coming… except maybe for Marty Turco, who’s been hotter than hot. can wind their series up tonight with a win at home, but I’ll be rooting for the Sharks. I want to see this series go on just a little bit longer…say two more games… before moseys on up to Deetroit for the conference finals.
But…who’d a thunk it? Not one, not two, but three teams in that 0-3 hole in the second round? In this age of NHL “parity?” Amazing.
About last night, specifically last night in . The game wasn’t nearly as close as the score (or the shots-on-goal) would make it seem. The Wings were in control all the way and handled everything the Avs could throw at them, as well as self-inflicted wounds in the form of two back-to-back bench minors in the third period for too many men on the ice. From The Freep:
A furious attack by the Avs in the third period saw Detroit’s two-goal lead reduced to one when Andrew Brunette scored his second of the game, whacking in Joe Sakic’s rebound at 5:19 during the first of two straight penalties the Wings received for too many men. This baffled Mike Babcock, because he doesn’t remember the Wings taking more than one such bench minor all season.
“It’s not like we were matching or anything, we just made a couple mistakes,” he said. “I guess that’s excitement; I don’t know exactly. But we gave them momentum and then we were able to fight through it. I thought Ozzie made some good saves and yet down the stretch, I thought we got on top of them again.”
The Wings were on top…as evidenced in the final minute of the final period when the majority of play was in ’s zone, with goalie Theodore on the bench. The Avs, try as they might, just couldn’t pull together enough offense to score that last-second desperation goal to tie it. And now they’re staring into the abyss.
I love it.
And…as always, last night’s highlights. All the goals, some of the hits, and some of the saves.
Committed to the Inter-tubes by Buck on 4/30/2008 11:33:00 AM