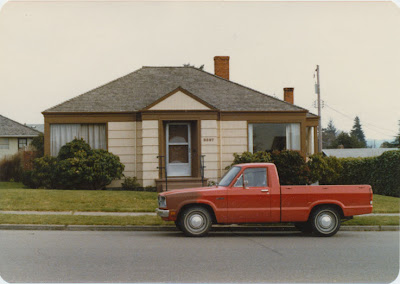 Exterior, front... along with our 1979 Ford Courier pick-up, which is really a Mazda 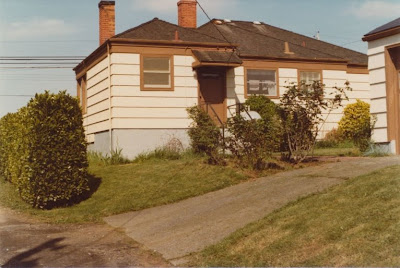 Day before yesterday I posted a photo of My Favorite Frog and The Second Mrs. Pennington that was taken in our home in . North Bend, , to be exact…which, along with its sister city Coos Bay… forms one of the nicer places I’ve ever lived. The geography is good, what being on the coast and all, the weather is generally fine albeit a little wet, and the people are friendly, for Oregonians. Which isn’t to say they’re Unfriendly, it’s just that they’re Oregonians…the folks who supposedly originated the term “Californication” and most definitely invented the UNgreeting Card. They can be a bit stand-offish, especially to outsiders, and especially if they think you’re gonna stay in their . But we managed to muddle through… 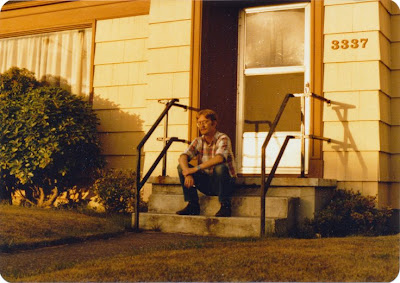 is also the town where TSMP and I bought our first house. Even though we were poor, we managed to buy a house about a month after we arrived in in August of 1978…more about HOW we managed to buy the house comes later. Like most first houses, our was small… a two-bedroom place with about 1,100 or 1,200 square feet and a single bathroom, built in the late 40s or early 50s. But the place had wonderful fenestration, new carpet, new paint, and a great big oil-fired, hot water heating system with massive radiators that pinged, clanged and hissed in the process of getting the house warmed up. The home’s previous owners had also been avid gardeners and bequeathed us a rose garden that was both beautiful and fragrant. We never lacked for fresh-cut flowers during Spring, summer, or Fall. The roses were the best, but there were other flowers, as well. 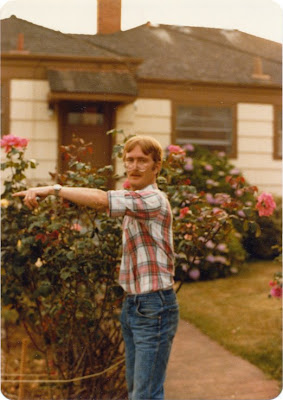 Me, with some of the backyard flowers 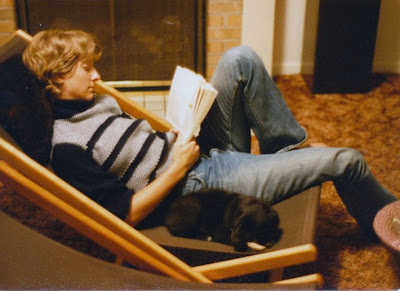 TSMP in one of those comfy sling chairs 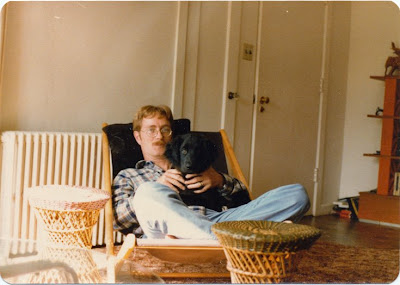 Me in the other comfy sling chair along with Kuma, aka Koomer Za Zoomer

As I noted in the Froggy picture day before yesterday, TSMP and I were pretty poor at the time. We furnished that house with (about) $500.00, and our furnishings consisted of two sling chairs from the JC Penney garden center, a cheap dinette set, a glass and chrome coffee table (our sole “indulgence,” which remained with us until the very end), a mattress on the floor and some other odds and ends… including my stereo, which was replaced by a friend’s stereo…for about a year or so. We had no teevee; we had a dog, instead. Much more entertaining. 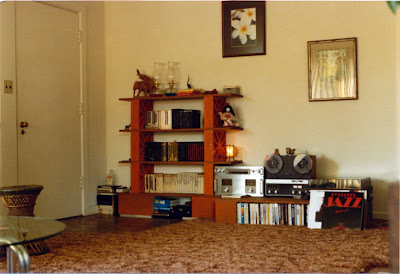 Our house had the air of an up-market hippie crash pad, due in no small part to the décor (such as it was), and the fact there were three of us living there. A good friend of mine, who was also stationed at North Bend AFS and who was going through hard times, moved in with us when we took possession of the house. My Buddy was the victim of bad choices and bad luck that led to him being (a) involuntarily discharged from the Air Force and (b) being involuntarily discharged from his relationship with his girlfriend, later his wife…at nearly the same time. So TSMP and I took him in while he got back on his feet. And there were various comings and goings of other characters as well, which I’m sure had the neighbors wondering, if not talking among themselves.

But…life was good in that house. Life was also pretty much normal. I left for work every morning around 0700, and got home around 1700…rinse, repeat, five days a week. I went to night school at the local community college. TSMP went through a number of shit-jobs following her graduation from that university in with the used-to-be-great football team…among them car salesperson and waitress in a Japanese restaurant, where she put her BA in Japanese to some use, anyway. She eventually landed a better job, becoming a personal assistant/admin to a self-employed real estate appraiser, which, in turn, opened up a whole new circle of friends for us. Her boss, Max, also owned an airplane which he wrote off as a business expense (aerial photos of properties, ya know), and that plane was the platform from which TSMP shot the photos of the air station, below. 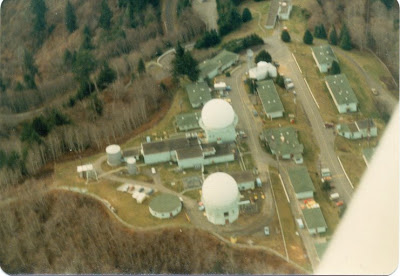 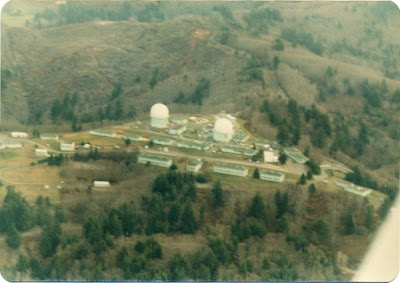 was also where I purchased that red RD-400 (my favorite mo’sickle of all time), and where I spent many enjoyable hours “building” that bike in the small detached garage out back. I also rode the bike to work nearly everyday…when the weather agreed, and sometimes even when it didn’t. It rained a lot in that part of the world. The ride to and from work was most exciting and challenging… as the site access road climbed about 5,000 feet in the space of about five or six miles… and that road was a twisty-turny sport biker’s wet dream, Gentle Reader. And I got to ride it twice a day, every day, five days a week. Great good times, those were.

Ultimately, the best thing about that house was the Oregon State VA loan we had, which was the sole reason we could afford to buy a house in the first place, given our level of poverty in 1978. ’s Department of Veterans Affairs had a state-funded mortgage program for vets at that time, and the State was our mortgage banker. This was a wonderful program for Vietnam-era vets and one needn’t have served IN Vietnam, you only had to be in the service at the time to qualify for one of these state-funded mortgages. So, I qualified…and the loan carried a mere 3.5% interest rate and what’s more, those same mortgages were assumable by anyone… vet or not… at a rate of 5%. This being in early 1980, at which time… if you’re old enough to remember… we were in the end-game of Carter-era stagflation (well, it’s easy to blame Jimmuh but he wasn’t wholly at fault, just mostly. Assuming you disregard Tricky Dick.). Not a fun time to be buying or selling a house, to put it mildly. When we put our house on the market in the first week of May, 1980 the prime rate stood at 18.75%, with mortgages going around 3% over prime. So… you can see the appeal of a loan assumable at a mere 5%, can you not, Gentle Reader?

We had a firm offer at our asking price…full asking price… the day we put the house on the market. We laughed all the way to the bank, and quite literally, at that. We put the profit from the sale of the house in a jumbo CD, packed up our sling chairs and other stuff, and left for Ol' Blighty in the summer of 1980, where we spent the next three years living in London.

We weren’t so lucky with our next house, but that’s quite another story…one which ended when we took a rather substantially-sized check to closing when we sold. Not when we bought the house, but when we sold it. Bad juju, that was. But: another time.