… other than the fact I’m in a somewhat lazy and self-indulgent mood today, coupled with the additional fact that there’s not much that interests me in the realm of current events… here are three really old pics of YrHmblScrb at the very beginning of his USAF career. 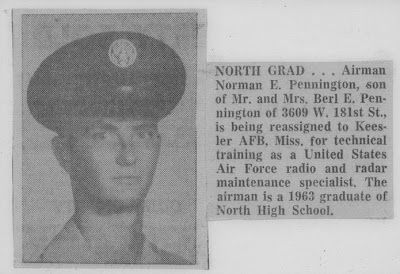 The pic above is a 1963 newspaper clipping announcing to anyone and everyone who cared (a small audience, that… consisting mostly of my parents) that I was off to Keesler AFB in Beautiful Biloxi, Mississippi for to become a “radio and radar maintenance specialist.” Which only goes to show how clue-impaired the USAF Public Relations people were at the time, and still are… from what I hear. There were, at the very least, three different ground-based radar specialties (aircraft control and warning (AC&W), ground controlled approach (GCA), and radar bomb-scoring, otherwise known at the time as “auto-track radar”) and at least that many radio maintenance specialties. Moreover, the twain never met as far as work went, although us radar and radio types did kinda hang together. 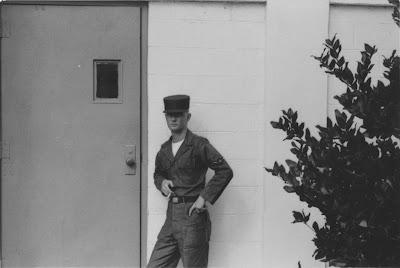 This pic is of Airman Third Class (E-2) Pennington standing at the entrance to his barracks. A3C is the rank a single solitary stripe conferred upon its wearer back in the day; today’s one-stripers are simply called “Airman.” One is no longer “third class,” or even “second class,” in the lower enlisted grades. These days one goes directly from Airman (E-2) to Airman First Class (E-3), which may or may not be a good thing. But I digress, as is my habit.

You cannot believe, Gentle Reader, how proud I was to sew that one lonely little stripe on my sleeves. Making Airman Third was the first promotion one used to receive in the Air Force, and it’s a pretty big day. Until you realize that 99.05% of the Air Force still outranks you. Life at the bottom of the food chain just ain’t all that good. Especially when we still had things like KP, squadron and base detail, and various and sundry other inconvenient, dirty and boring things to occupy our time. Like the other services still have, or so I hear. 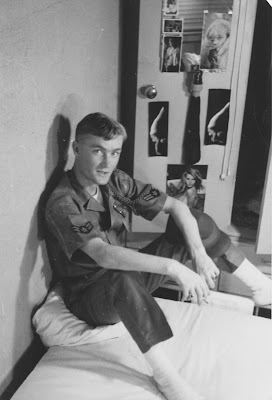 This picture was taken in my dorm room, which I shared with two other troops. By this time I had advanced to Airman Second Class (E-3) and was only outranked by approximately 90% of the rest of the Air Force. An improvement in status, but a minor one. I had also become a student leader, AKA a “rope,” which entitled me to wear said rope on my left shoulder and conferred additional, albeit very limited, responsibilities and (much more limited) privileges… a private room NOT being part of that package, unfortunately. (See here for more on ropes) But at least we in the Air Force had rooms. The other services lived in open-bay barracks at the time, and I hear (yet again) some still do. We won’t talk about how the Navy lives. We’ll simply provide an illustration of how their ossifers live aboard ship. You can just imagine how the enlisted swine live, by comparison. It’s not pretty, Gentle Reader.

Ah, but I had more than the usual, customary, and reasonable amount of fun in those days. Even considering that I lived on $99.37 per month, gross. That meant I actually received something close to $40.00 each and every payday, without fail. It was entirely possible and perfectly conceivable (if not normal), Gentle Reader, to blow the entire amount in one go at the various dives and gin mills located right outside the gate. Don’t ask me how I know this. I just DO…