A Strange Sort of Monday

So…didja watch the All-Star game? If you did you might agree that it was one of the better…if not the best…All-Star games in quite some time. You could be forgiven if you watched and decided to move on to something else after the first period was over…coz it looked like the game was gonna be a blow-out kind of snoozer, and blow-outs are always snoozers, right? The East led after the first period, 5-1. But, as they say, things got interesting in the second period when the West narrowed the lead to 5-3. The game turned into an edge-of-your-seat affair throughout the third period, when the West tied it up at 5-5, scoring two goals just a little less than two minutes into the final period. The final 18 minutes of the game saw both sides scoring a total of five goals, culminating with the East’s 8-7 win with just 21 seconds left on the clock in regulation time.

It doesn’t get a lot better than this, Gentle Reader, even considering the game meant nothing (other than lotsa fun for all involved) and not a single penalty was called. As a matter of fact, there hasn’t been a penalty called in an All Star game since 2000. All in all, the game was a fine way to spend a couple of hours on a Sunday afternoon in January. 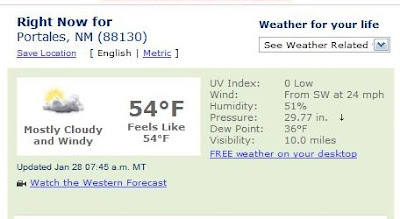 We’re having rather strange weather here on The High Plains of this morning. It’s relatively warm for a late January morning, but the wind is blowing whatever warmth there is outside to points north and east. But Hey! The folks north and east of us need a lil bit of warmth after getting their butts kicked with all that ice Friday and Saturday last. As for us…we hit 67 degrees yesterday. I considered, oh-so-briefly, uncovering Miss Zukiko and taking her out for a run before the game yesterday afternoon. The wind was all that stopped me.

Is there anything in this country that goes un-analyzed? Anything at all? I ask, Gentle reader, because I think this is just a lil over the top. A quote:

Obama's type is contemporary, fresh, very polished and professional. The serifs are sharp and pointed; clean pen strokes evoke a well-pressed Armani suit. The ever-present rising sun logo has the feeling of a hot new Internet company. His sans serifs conjure up the clean look of or . This typography is young and cool. Clearly not the old standards of years past.

Well. The evocations of “a well-pressed Armani suit” (is there any other kind? Do you normally see guys in rumpled Armani suits?) and “hot new internet company” (again: any other kind?) apply to Obama’s campaign logo. There are other, similarly vapid analyses of the fonts used in all the candidates’ logos…if you’re interested. And you just might be interested… Hell, I was. There was a time, believe it or don’t, when I argued the finer points of serif fonts and other such nonsense. All in the name of “effective communications” and “presentation value.” Arghhh…

I awoke this morning and noticed it’s a Monday…right off the bat. That may sound somewhat strange to those of you who remain in the traces and are slaving away in an office, a cube, or whatever/where ever your place of business may be. The fact it’s Monday isn’t lost on you, I’m sure. But it’s unusual for me, because one day is pretty much the same as the next. That happens when one is retired. What’s even more unusual is I felt a brief twinge of something… something very much like a longing… that I wasn’t heading off to a workplace of some sort this morning. About which… is the first time I can recall feeling that way in a long, long time. What I mean is… how, exactly, does one miss…

Rinse, repeat, for a little over two years. There were variations on this theme. As an example, I lived in for the first year I was in SFO… so the BART ride was shorter (much shorter) and I walked from my apartment to BART and back. Same, but different. How, exactly, does one miss this kinda…umm…stuff? Am I crazy? That’s what I felt I was missing this morning, Gentle Reader.

Today’s Pics: Keeping with the theme of “Missing the Working World,” three pics of YrHmblScrb at his place of business. Well, two pics at his place of business, and one where I’m less than 20 minutes removed from the office and enjoying a beer in the rooftop bar of the Mandarin Hotel in Singapore. That bar had a magnificent view of the city, but let's not digress. 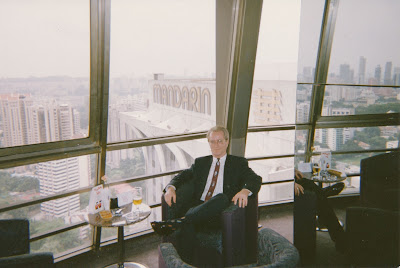 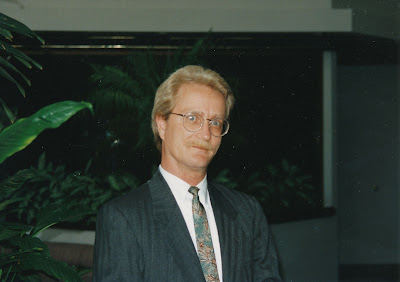 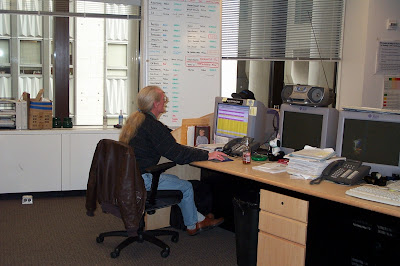 Note the difference in corporate cultures… as if you could miss it. The first two photos were taken when EDS was the most buttoned-down of all button-downed companies in (before they gave in to the “corporate casual” movement sometime around ’96) and the third was taken in my company’s Site Operations Center (SOC). I was the SOC Director.

Wanna guess which company I liked better? You might be surprised at the answer, Gentle Reader.