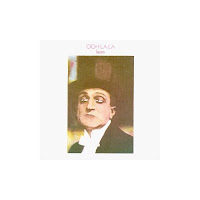 Further on one of yesterday’s posts…specifically the Faces’ “Ooh La La” vid/song. Two folks commented as to how weird that video is, and I suppose they’re right. What didn’t occur to me yesterday is not everyone…hardly anyone, actually… would “get” the video if they had little or no context within which to place it. And context is key, nu?

Here’s the album cover and a picture of a couple of post card inserts that came with the album back in ‘73. That cardboard cut-out gentleman “singing” Ooh La La was on the album cover and came as you see in the video…meaning you could manipulate his jaw up and down like some 19th century toy, which was the whole idea…IIRC. And it was great good fun to play with when one was off in some other “altered state.” Keep in mind: this is 1973 we're on about here.

And just in case you didn’t get the lyrics, here they are: 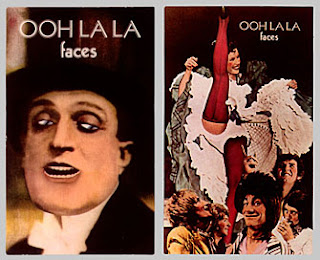 They’ll trap you, then they use you
Before you even know
For love is blind and you’re far too kind
Don’t ever let it show

The can cans such a pretty show
They’ll steal your heart away
But backstage, back on earth again
The dressing rooms are grey

When you want her lips, you get a cheek
Makes you wonder where you are
If you want some more and shes fast asleep
Then she’s twinkling with the stars.

Poor young grandson, theres nothing I can say
You’ll have to learn, just like me
And that’s the hardest way
Ooh la la

Ah…that chorus. It’s an old person’s lament, but none the less true for it. As for the rest of the song, specifically about women’s ways…well, if the shoe fits...