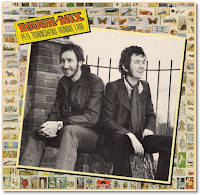 This is a confused post, but bear with me. I begin at some obscure point, digress to something just as obscure, and come around full-circle to where I began, in a sense. Just trying to be “obscure and oblique,” as it were.

So…I went looking on YouTube for a small treasure of a song from Pete Townshend and Ronnie Lane’s collaboration album “Rough Mix” (cover on the right). I was unsuccessful, and more’s the pity…coz I really, really wanted to share it with you, Gentle Reader. But I found this little gem while looking unsuccessfully for the song I wanted. And this will have to do:

That would be The Faces, a band that was an outgrowth of The Small Faces. As noted above, the song is another minor gem from a band that doesn’t get near the credit it deserves, but (the band) was in constant rotation in MY small corner of the planet, wherever that small space happened to be, in the ‘70s. Good stuff. Or, another way to put it: Ronnie Lane and Rod Stewart (and a gaggle of other fine rockers…click the “Faces” link and be amazed), in their prime.

But. Back to what I was looking for. The track is “Misunderstood,” and you can hear an all-too-brief sample here (scroll down, Track #7). The lyrics:

Pretty cool, eh? Or then again, maybe ya had to “be there.” I still wanna be obscure and oblique…to this very day. Some would say I’ve succeeded, but I don't think I'm even near the level of obscurity and obliqueness I desire. But, Hey! Everyone needs a goal in life.