So. A number of things conspired to mess up my daily routine today. First and foremost…I remain upside down as far as time goes. And, ya know what might be the worst thing about being “up all night?” The absolute and total suckage of late nite teevee. All the news channels go into re-runs after the midnite hour, my local PBS outlet runs “educational” programs targeted at freshmen college students (some of that stuff is interesting, most isn’t), and the History Channel, the Discovery Channel, yadda, yadda, all go into extended infomercials…and there hasn’t been a word minted yet to describe that level of suckage.

Oh, there’s marginal entertainment value in some infomercials, like those from Time-Life flogging zillion-CD collections of stuff like “Best of the ‘70s!” and the like. Once. The ones that really get me, tho, are the get-rich-by-working-at-home infomercials. Aside from making ludicrous claims, these type of programs prey on the ignorant and unsuspecting. I suppose that’s always been so…after all, that famous quote misattributed to P.T. Barnum has always been in play and will remain so. Still and even, I wish the FTC would take some of these idjits down, if only because they’re a public nuisance, not to mention insulting to anyone with an above-room-temperature IQ. Major digression here. Sorry. Well, scratch that…I’m really not.

Where was I? Oh. Yeah. The daily routine…

Aside from getting up around the crack o’ , I absolutely, positively had to make a premature supply run, as the WX is forecasted to go rapidly downhill this afternoon and remain bad until at least Sunday. And then there are the approaching holidays, which will lock things down tighter than the Lil Drummer Boy’s drum. We can’t afford to run out of consumables during this particular time, now, can we? So…out to the base… with visits to the commissary, the liquor emporium, and the hospital clinic to re-supply the meds. And we are now re-supplied and ready for both the weather and the holidays. Do your worst…I’m prepared.

The Holiday Blahs are affecting me in other ways, too. I checked my mail box on the way out of Beautiful La Hacienda Trailer Park and was shocked to find at least two weeks worth of mail stuffed into that tiny box. Could it be I’ve not checked snail-mail in two weeks? Why, yes. Obviously, judging by the sheer quantity of “stuff” in the box. In my defense, all the “important mail” (read that as: bills) comes during the first week of the month. After that, aside from the weekly mailings from my mail service in (a holdover from my “on the road” days) all I usually get is ads and other junk mail. So…mail is checked weekly, at the most. But I never go two weeks without emptying the box. Until today. Gah! Thankfully there wasn’t anything time-sensitive in the accumulated stuff. 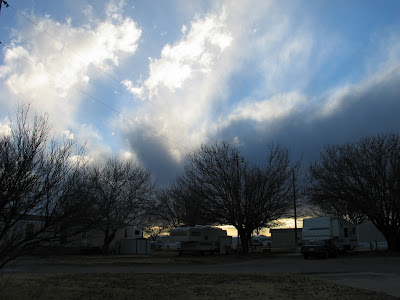 Today’s Pic: A shot of today’s afternoon sky, looking south-southeast, taken about 45 minutes ago. While the predicted front that will move in later this evening with all that snow and ice and wind will come out of the northwest, this particular cloud formation caught my eye. And it's completely gone as I type this post up… so you’re seeing a fleeting moment in time, Gentle Reader. Speaking of fleeting time…

I was only able to take one picture of this sky, however, before my battery died with NO warning what-so-ever. I’ve been preparing for this, though. The signs of impending battery-death have been persistent and numerous for the past two weeks…so I ordered a new battery at the same time I bought the scanner. And the new battery is in the camera…charging away…as we speak.

My camera uses a proprietary Canon battery, which I hate. First and foremost, the things are expensive…like 50 bucks. Second, they last about 14 months, tops. That’s much too short-lived, in my opinion. I don’t believe I’m a “heavy user” when it comes to my camera and I further think the battery should last longer than it does. This is the only thing I don't like about my camera.