I’ve just about had it with The Weather Channel. As I’m sure you’ve heard, or perhaps even seen, Newsweek’s cover story this week is all about the massive climate-change-denial cabal, which is led (of course) by those money-grubbing, mega-profiteering, polluting, polar-bear killing, super-nasty meanies at Big Oil, supported by scientists who’ve sold their very souls to the Masters in Houston and Dallas, among other places. And… true to form… ClimateChangeExpertDoctor Heidi Cullen (which is exactly the way she’s introduced…and refers to herself…every frickin’ time) was just bubbling over with joy at the news last night. The good ClimateChangeExpertDoctor featured Newsweek’s cover in her daily “Forecast Earth” segment yesterday, which, by the way, was complete with a gratuitous inclusion of The Goracle denouncing Exxon-Mobil, as Young Heidi notes, by name. Oooh. Gosh, I’ll bet that stung.

If there was an alternative to The WX Channel…and there is NOT…I would be SO gone. One can get a local forecast off the ‘net, and I do. But one cannot get a three minute weather briefing for the entire country off the ‘net, not without a lot of surfing. So, I’ll just grin and bear it, I suppose. But ClimateChangeExpertDoctor Heidi Cullen? Just another penguin in The Goreacle’s Army.

So. Apple announced a new iMac yesterday, and it’s a pretty cool looking machine with impressive specs. I was gonna include an image of their new box in this post, until I clicked on the image and got this:

Subject to the terms of this Agreement, you may use the Image solely in whole for editorial use by press and/or industry analysts. This right to use is personal to you and is not transferable by you to another party. The Image cannot be used to promote or sell any product or technology (such as on advertising, brochures, book-covers, stock photos, t-shirts, or other promotional merchandise). You may not alter, or modify the Image, in whole or in part, for any reason.

As between you and Apple, Apple is and shall remain the sole and exclusive owner of the Image. You will not delete, alter, or obfuscate any proprietary legends relating to the Image, and each use will be accompanied by the applicable proprietary attribution shown next to the Image.

The Image is provided by Apple on an ‘as is’ basis, without warranty of any kind, including non-infringement or ownership. You, not Apple, are responsible for your use of the Image. Any misuse of the Image or breach of this Agreement will cause Apple irreparable harm. Apple is either an owner or licensee of the image, not an agent for the owner. We understand that you will give our company a credit line as follows: “Courtesy of Apple” and also credit the photographer if noted.

And of course, you can either click on “Agree” and download the image…or not. I elected to “not.” Apple may make cool computers, but they obviously have too damned many lawyers. Screw that.

Didja know you have a Birth Tree, among other things, Gentle Reader? I never knew that. Birthstone, yes. Tree, no. My Birth Tree is the Hazelnut tree:

Aside from the fact that a tree simply cannot be an “active fighter for social cause,” does anyone else see a contradiction in “moody and capricious lover” and “honest and tolerant partner?” Is this a serial thing…as in the capricious lover turns into a tolerant partner, or do the traits exist in a sorta yin-yang relationship? Dang. This is way too deep for me. 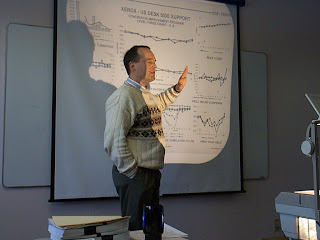 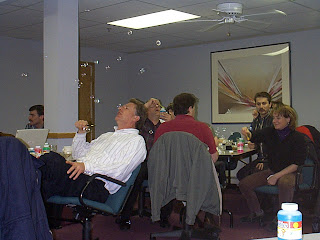 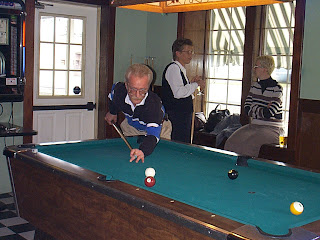 Today’s Pic(s): How I Used to Make Money. I’d have used “Weird Scenes Inside the Gold Mine” as the title for these pics, but that title’s already taken here at EIP...five times. (This is an oh-so-blatant teaser to get you to read some of my...uh..."creative" writing, Gentle Reader. I'm not ALL about politics and such.)

Anyway. Three scenes from a life of unending PPTs, irrelevant off-site meetings (with entertainment!), and the thing that made it all worthwhile (aside from that paycheck and the paltry residuals that come in every month these days)… shooting pool at the bar after one of those irrelevant off-sites.

Life is SO much better these days...