So. I took my morning coffee on the verandah today…three cups of it, anyway, accompanied by about a third of a cigar. And, in so doing, I put off my usual routine of coffee/making the virtual rounds until rather late in the morning, as defined by folks with real lives and…um…dare I say it?...jobs.

There wasn’t a cloud in the sky when I stepped outside, coffee in hand, this morning. And it was 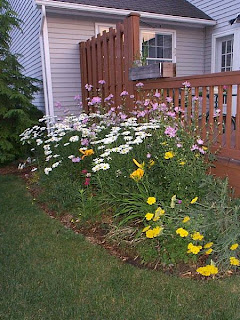 already up to 75 degrees at 0830. A beautiful day, in other words. So, there I sat, coffee in one hand, cigar in the other, feet up and feeling pretty danged good about things. I got to thinking about days gone by and of other places I’ve had my morning coffee.

The first place that came to mind was here, and this is a pic of my deck at the ol’ homestead in . I was always an early riser back in my working days, and I’d often take my first cup of coffee on the deck (and sometimes the second cup, too, depending on the schedule) and watch the sun come up over the neighborhood…say around 0530, or so. In the summer time, of course, the deck being not quite as accommodating in the winter, as you can see. The thing I loved about this particular place and time was the quiet…traffic hadn’t yet begun its crawl out of the sub-division, the birds were chirping, most of the world was still asleep, and there was always a certain coolness in the air before the summer sun began warming Upstate New York. 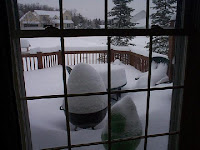 It was very peaceful, in other words, and a good place to get organized while contemplating the upcoming day.

So…various and sundry other places popped into and out of my mind, as well. The dining room table in that overlooked the backyard, aka “the garden,” as the Brits say. Watching the dogs chase the squirrels in the early summer morning, windows open, and warm, humid breezes blowing in and billowing the lacy curtains back and forth.

Or sitting on my patio at the house in Oklahoma City (Choctaw, actually, a suburb of OKC), looking out over the property which consisted of two acres dotted with numerous scrub oaks and two or three “real” trees (i.e., over ten feet tall). One of the real trees was a towering oak of about 40 feet or so that sported an old-fashioned two-seat swing suspended from a thick low-hanging bough. Coffee was taken in that swing too, often in the company of The Second Mrs. Pennington…but she usually only joined me in the swing on the weekends.

And then there were those times back in my Work Days, when I was on the road and had to arise, get cleaned up, and get fully dressed before I had my first cup. I took those first cups in various dining rooms or coffee shops at the hotels I stayed in. . . . . The coffee was uniformly bad, nearly always. A good cup of coffee, in the days before Starbucks and especially overseas, was a rare thing, indeed. Eventually I took to carrying my own coffee with me. 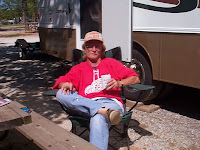 I thought about other places where morning coffee was had…places like the various apartments I’ve lived in, the Air Force chow halls, and the RV parks I’ve stayed at/in, too. My morning coffee, and the rituals surrounding it, is perhaps the one thing that has remained unchanged throughout my life. A lot of things change in life as we move forward …people, places, and things… but some things remain the same. And my morning coffee ritual is one of the constants. The end is nigh if that ever changes…