The Good, the Bad, and the Pretty Danged Cute...in reference to the Little Guy

Here’s another paean to Robert Heinlein, this time in the WSJ…

Science fiction at one time was despised as vulgar and "populist" by university English departments. Today, it is just another cultural artifact to be deconstructed, along with cartoons and People magazine articles. Yet one could argue that science fiction has had a greater impact on the way we all live than any other literary genre of the 20th century.

When one looks at the great technological revolutions that have shaped our lives over the past 50 years, more often than not one finds that the men and women behind them were avid consumers of what used to be considered no more than adolescent trash. As Arthur C. Clarke put it: "Almost every good scientist I know has read science fiction." And the greatest writer who produced them was Robert Anson Heinlein, born in , 100 years ago this month.

The list of technologies, concepts and events that he anticipated in his fiction is long and varied. In his 1951 juvenile novel, "Between Planets," he described cellphones. In 1940, even before the Manhattan Project had begun, he chronicled, in the short story "Blowups Happen," the destruction of a graphite-regulated nuclear reactor similar to the one at . And in his 1961 masterpiece, "Stranger in a ," Heinlein--decades before Ronald and Nancy Reagan moved to the White House--introduced the idea that a president's wife might try to guide his actions based on the advice of her astrologer. One of Heinlein's best known "inventions" is the water bed, though he never took out a patent.

I learned something new from reading this— as is the case with nearly all the reading I do —and now have a new favorite quote (Heinlein, of course):

"Some people disparage the female form divine, sex is too good for them; they should have been oysters."

A Bad Idea… “US Senators call for universal Internet filtering.” I’m aligned with these guys (a case of strange bedfellows, if there ever was one), rather than the geriatric yet illustrious Senators Inouye and (most specifically) Ted Stevens, he of inter-tubes fame. The whole thing about Stevens was beat to death last year, but just in case you’ve forgotten…here’s a partial quote:

Ten movies streaming across that, that Internet, and what happens to your own personal Internet? I just the other day got... an Internet was sent by my staff at in the morning on Friday, I got it yesterday. Why? Because it got tangled up with all these things going on the Internet commercially.

[...] They want to deliver vast amounts of information over the Internet. And again, the Internet is not something you just dump something on. It's not a big truck. It's a series of tubes. And if you don't understand those tubes can be filled and if they are filled, when you put your message in, it gets in line and it's going to be delayed by anyone that puts into that tube enormous amounts of material, enormous amounts of material.

In a monumental first for EIP, I’m gonna quote Jon Stewart (from the wiki article on Stevens):

Stewart compared him to "a crazy old man in an airport bar at 3:00 am", then going on to answer his question, "Why?" with, "Maybe it's because you don't seem to know jack shit about computers or the Internet — but that's okay — you're just the guy in charge of regulating it."

(Stewart’s a funny guy, I don’t deny that. But his “usual targets” are people and things I hold dear and thus I don’t find him all that funny. Most of the time. But he’s spot-on, here.)

The good senators claim government regulation filtering blocking censorship is needed to “protect the children” from child pr0n and predators. Just how blocking and filtering technology is going to affect the process and mechanics of on-line child predation escapes me completely, but…whatever. In Stevens’ defense, he’s asking the FTC to “form a working group to identify blocking and filtering technologies in use and identify, what, if anything could be done to improve the process and better enable parents to proactively protect their children online…” At this point, that is. Gub’mint being gub’mint, there will be studies, proposals, laws and finally funding for the FTC, the FCC, yadda, yadda, yadda. And it’s hard to argue against the effort, because it’s “for the children.” I’ve seen this movie before.

But the basic answer to Inouye and Stevens’ proposals is “No!” PARENTS are the responsible parties, not the government, thank you very much. Slippery slope, First Amendment, and all that minor stuff.

Captain Ed is on the same page as I. 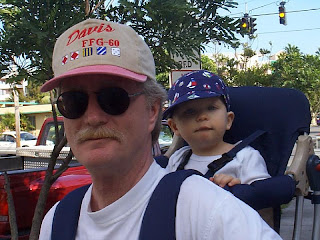 Today’s Pic: For the Children! This is perhaps my absolute favorite pic of SN3 and I. I may have posted this before, but whatever…everyone goes into re-runs occasionally.