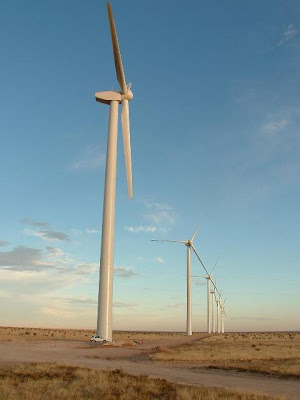 Dame Jenny of Floyd sends along these pictures of wind generators taken near Elida and House (both small communities to the south and west, respectively, of P-Town) just to illustrate the size and scale of these wonderful machines. Pretty cool, eh? And by the way...that's a Saturn Vue parked under the tower in the first pic. These towers are massive in height!

The first pic reminds me of those old joke post cards from the Southwest (in color and setting) that were everywhere during the 40's and 50's...you know, the ones with the gigantic outsized rabbits, jackalopes and the like. Except this pic is REAL.

We were talking about the size of these things in the comments yesterday and my “best guess” was the height of a wind-generator “…is at least 50 feet.” Well, so much for my best guess…which was waaay out of the ball park! As Jenny notes, that would be the diameter of the typical prop in the installations around here! The towers themselves are hundreds of feet high…General Electric manufactures systems with tower heights from 200 feet and up. Their larger systems have a rotor diameter of 104 meters…that’s 338 feet! Imagine the tower height for that baby!! 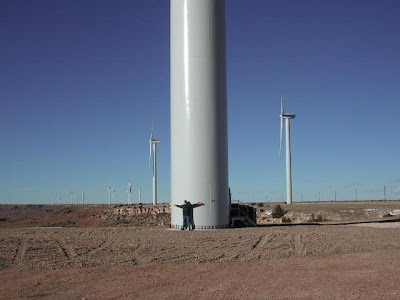 I’ll be back later…assuming the line of thunderstorms advancing on P-Town doesn’t knock me off the air. It's Sunday...and Yucca Telecom is slow to restore service outages on the weekend. A lightning strike on one of their towers could knock me off the air for hours and hours....