It was a wild, wild, night: Tornado slams Clovis. But no one was killed, Thank God.

The worst tornado in ’ history struck the city’s southeast side Friday night, leaving more than a dozen injured and possibly hundreds of homes damaged.

No deaths were reported, but officials said at least three patients at were listed in critical condition.

Rescue workers were still searching storm-ravaged homes early this morning in search of injured or trapped residents. Details related to damage were not immediately available.

“We don’t know what we’re dealing with until the sun comes up and the lights come on,” said police spokesman Jim Schoeffel at a news conference late Friday night.

The tornado, wrapped in heavy rains, hit the city at , the National Weather Service reported, about 20 minutes after tornado sirens warned of danger. Debris was strewn across U.S. Highway 70 and officials quickly closed the road and urged sightseers to stay away. It remained closed early this morning.

At least five tornadoes were spotted in the area before was hit, said National Weather Service Meteorologist Chuck Jones. Jason Boggs, a storm spotter from , said he saw the twister that likely hit while it was still in . He estimated it was one-half mile, but said he believes it was not that wide when it struck .

Portales received heavy rain, but no injuries were reported and no ambulance calls were made related to the weather, Portales Police Capt. Lonnie Berry said.

It could have been worse, as it’s said.

This morning dawned clear and cool, with bright blue skies and lots of puddles. We DID get some rain last evening, and lots of it. I think the next time we have a weather episode like this I’m gonna head over to the hospital with a book. It was very stupid of me to just stay put last evening. You’d think I would have learned by now, eh?

The Weather Channel and several local (i.e., Albuquerque) stations are still AWOL on the cable system as I write (1000 hrs). I noted in the comments to “Look What’s Headed…” that the WX Channel went belly-up last evening just as the second wave of storms moved through the area. I’m still pretty pi$$ed that the management at Cox Cable couldn’t be bothered to call someone out last evening and restore the satellite feed that’s (obviously) gone bad. The WX Channel is not just a luxury during severe weather, it’s a necessity. Shame on Cox Cable.

Words that will fall on deaf ears:

If the goal of peace demonstrators is to influence public opinion and encourage an end to the war, the activists must connect with their fellow citizens — not repel them.

Most of the people who marched on Sunday fully understand this. And by singling out the few who didn’t, we don’t intend to place thousands of demonstrators under one label. But the actions of a few do create a public perception that at least some advocates for peace are anti-American, anti-police and far out of step with mainstream values.

The anti-war demonstrators who behaved responsibly this past weekend have an obligation to denounce — and distance themselves from — those protesters who purposefully offend others and consequently destroy the intended message of peace.

This from the , OR Tribune. isn’t exactly a conservative hotbed, but then again, it ain’t SFO, either. There are some truly disgusting details in this op-ed, details I won’t quote here.

From the Guardian ()… Supreme court ban on liberal party wipes out opposition to Putin.

's next parliament is likely to have no genuine opposition after a court in yesterday banned a leading liberal party from standing in elections.

's supreme court announced that it had liquidated the small Republican party, claiming that it had violated electoral law by having too few members. The party is one of very few left in that criticises President Vladimir Putin.

The move against 's opposition came as pro-democracy activists prepared for the latest in a series of anti-government rallies that have infuriated 's hardline authorities.

The Kremlin argues that its new electoral law - which says that all political parties must have 50,000 members and be represented in half of 's provinces - is meant to streamline 's untidy political scene. Critics say the legislation is designed to kill off smaller parties that oppose the Kremlin.

Alberto Gonzales has to go. I say this with no pleasure — he’s a decent and honorable man — and without the slightest expectation that his departure will blunt the Democratic assault on the Bush administration over the firing of eight attorneys. In fact, it will probably inflame their bloodlust, which is why the president might want to hang on to Gonzales at least through this crisis. That might be tactically wise. But in time, and the sooner the better, Gonzales must resign.

It’s not a question of probity, but of competence. Gonzales has allowed a scandal to be created where there was none. That is quite an achievement. He had a two-foot putt and he muffed it.

The linked article was published yesterday in National Review Online. The story gets even worse today, what with “new” documentation indicating Gonzales was deliberately deceptive about his role in the attorney firings.

Attorney General Alberto R. Gonzales met with senior aides on Nov. 27 to review a plan to fire a group of U.S. attorneys, according to documents released last night, a disclosure that contradicts Gonzales's previous statement that he was not involved in "any discussions" about the dismissals.

Documents detailing the previously undisclosed meeting appear to conflict with remarks by Gonzales at a March 13 news conference in which he portrayed himself as a CEO who had delegated to Sampson responsibility for the particulars of firing eight U.S. attorneys.

Perhaps I’m being hyperbolic when I say AG Gonzales was “deliberately deceptive,” but what else can one think? Can one even entertain the notion the Attorney General of the United States’ memory is so bad that he can’t recall sitting in a conference room for an hour with his staff in a meeting whose subject appears to be these firings? Well, you could believe his memory is that bad, but if that’s the case the man needs medical attention.

Have we had enough yet? I understand the argument that if we allow the Democrats to bounce Gonzales, they'll just aim for more, but Gonzales made himself the target here with what looks like blatant deception. I don't think we do ourselves any good by defending the serially changing stories coming out of Gonzales' inept administration at Justice. One cannot support an Attorney General who misleads Congress, allows his staffers to mislead Congress, and deceives the American people, regardless of whether an R or a D follows his name or the majority control of Congress.

When the story broke about the NSA terrorist surveillance program, Bush did not hide behind a morphable definition of "is" or "involved". He stood at the podium and told the press that he damned well did order the surveillance program and that he broke no laws in doing so. In that manner, he turned the leak into a net positive, showing that he had the courage of his convictions and that he intended nothing more than the security of the nation. 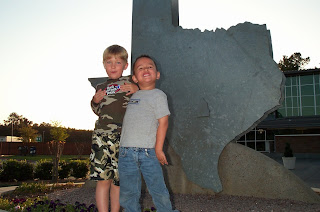