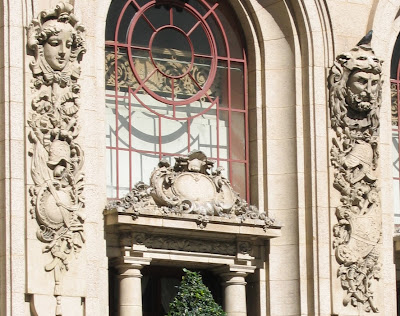 A Comparison of Live Hotmail, Gmail and Yahoo Mail. The money graf:
Overall we prefer Gmail over all other webmail applications because performance (speed) is consistently fast, and emails can be tagged making search much more effective. They also offer more storage and other features, and it’s free. However, Yahoo and Live Hotmail offer more mainstream Outlook-like user interfaces (although Live Hotmail does not allow you to access other email accounts from their application), whereas Gmail takes some time to get used to. If you are looking for speed and tagging is important, Gmail is for you. If you are looking for the closest thing to Outlook online, go with Yahoo Mail.
There’s a neat three-way comparison chart of available features, too.
Envy:
Everyone suspected that the investors, founders and early employees of YouTube made tidy sums when it was acquired by Google for $1.65 billion in stock late last year.
[…]
A founder and YouTube’s chief executive Chad Hurley received 694,087 shares of Google and an additional 41,232 in a trust. Based on Google’s closing price yesterday of $470.01, the shares are worth more than $345 million.
Another founder, Steven Chen, received 625,366 shares and an additional 68,721 in a trust, for more than $326 million.
[…]
When the deal was announced in October, YouTube was less than two years old and had about 70 employees. Several of the early employees are listed in the filing statement as owning thousands of Google shares.
That’s a lot of beer. And a Ferrari. Or three. Assuming the stock recipients are selling their stock. And they are.
So…I’m a little slow sometimes (ed: sometimes? How about MOST of the time? Shuddup!). I’m watching C-SPAN this morning, and Gen. Peter Schoomaker, the Army Chief of Staff, is testifying before the House Appropriations Defense sub-committee. He’s looking pretty sharp in his new Army Dress Blues. “Dress Blues?” Yep. Complete with Civil War era rank epaulettes. I didn’t realize the Army has changed its uniform, but they did—last summer. You can see it here.
Lileks to the rescue! I’m fond of describing myself as socially moderate and conservative when it comes to fiscal and national defense matters. But…what exactly is a “social moderate,” anyway? James provides the definitions, thusly:
Social liberal: believes Howard Stern should be able to say the F word not just on satellite radio, but broadcast as well.
Social moderate-liberal: same as above, but wishes Howard wouldn’t say it so much.
Social moderate: believes Howard Stern should not say the F word on broadcast radio, but has no desire to control the content of satellite channels to which people freely subscribe.
Social moderate-conservative: Howard should definitely not say it on broadcast radio, and while he probably has the right to say it on satellite, Senate hearings into decency on cable and satellite stations isn’t necessarily a bad thing.
Social conservative: doesn’t believe Howard Stern should say the word, and if you subscribe to satellite radio, you’re supporting Howard Stern, and have no right to call yourself a social conservative.
Yep. That’s me!
He kept them…but you probably already know this. The NYT:
Mr. Edwards announced on Thursday, after 36 hours of deliberation, that he would keep on his campaign staff two liberal feminist bloggers with long cybertrails of incendiary comments on sex, religion and politics.
Deliberations over the fate of the two bloggers, Amanda Marcotte and Melissa McEwan, created a crisis in Mr. Edwards’s nascent campaign for the Democratic presidential nomination in 2008 and illuminated the treacherous road ahead as candidates of both parties try to harness the growing power of the online world. The case of the two women had left Mr. Edwards, a former senator, with difficult choices.
Difficult choices, indeed. On the one hand, if Edwards had fired them, the nutroots would have had his head, figuratively speaking. They were already going down that road. On the other hand, his disingenuous rationale for keeping them just reinforces his hypocrisy, and that of the two bloggers in question. Marcotte’s and McEwan’s “apologies” said, basically, “it was just satire, we weren’t serious.” In pig’s eye. They were damned serious, and that’s the frickin’ problem. Jeff Goldstein says it best:
Of course it was her intent. Just as it was McEwan’s intent. And worst of all, Edwards knows it. That he has pretended to take the two at their word, in an ostentatious gesture of “trust,” is precisely the kind of staged treacle that makes people doubt the sincerity of politicians; and that both Marcotte and McEwan have assured their own personal Patriarch that they’ll behave, now that he’s promoted them to the grownups’ table, is, to put it bluntly, one of the most pathetic public surrenderings of personal integrity I’ve ever seen.
Seriously. We should feel bad for them.
That is, were we to actually believe they meant any of it. Because how this plays out for the netroots is this way: either they are cheering on an ideological sellout, or they are knowingly and happily embracing an opportunistic liar. So. Congrats to them. Once again, they’ve covered themselves in white hot sticky glory!
What he said. 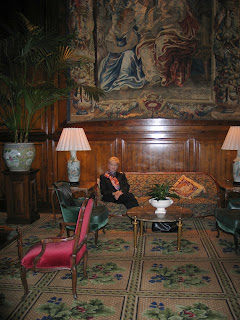 Today’s Pic: More Adolphus. The pic on the right is an interior shot of the ex-girlfriend in front of one of those Flemish tapestries, and the exterior (at the top) is a more-detailed shot of some of the stonework on the façade.
Lou mentioned in yesterday’s comments that she would post about the Adolphus on her blog. And she has. Great story, that!
Still February of 2004. Still in . As always, click the pic for the larger version(s).