Not Everything Deserves a Title...

Now THIS is really cool: Sunrise Earth. A new layer on Google Earth, and here are the instructions on how to use the feature from within Google Earth. I’ve only watched the sunrise over , but that’s just because my network connection is so danged slow. Broadband. Someday. So I’m told.

Via Lex…some great plane pr0n from the Nellis AFB air show. Absolutely stunning high-res photography; so good, in fact, that I now have new wallpaper. The guy that took these photos is a pro!

Ahhhh! RP is just SO good this morning… Here’s a set that was particularly pleasing (the times are PST):

Been peeking at my vinyl again, eh, Bill? {sigh} I wish I could take a peek, too…

A week ago today I posted a link to a longish but very thoughtful piece on the British Left by Nick Cohen. Well, The Guardian () got a huge response, and I quote:

Last week, we printed an extract from Nick Cohen's provocative new book, What's Left?, a searing account of how the British liberal-left has lost its way and, in the process, turned a blind eye to Islamic fascism. Cohen's piece sparked a huge response both online and in print.

And they proceed to publish some of that response plus comment in other venues, such as this:

'An exemplary piece of political satire, in which the generally amusing and ironic tone should not lull you into ignoring the deadly seriousness of the argument. It is not necessary to have a personal stake in a discussion like this, but it does help. Cohen started out trying to defend the honour of the left and attempting to appeal to its better traditions. He swiftly found that this made him the target of the most hysterical slander, from people whose hatred of liberal democracy has a long and sordid ancestry. He then lowered his head, clenched his teeth, steered into the storm and embarked on the toughest struggle an old leftist can ever undertake: a confrontation with former comrades who suspect him of "selling out"... Cohen's is an admirable example of self-criticism and self-examination, using intellectual honesty as a means of illuminating a much wider canvas.

Hitch knows all about “confrontation with former comrades who suspect him of "selling out".” His whole life has been like that for the past six years or so. I’m somewhat familiar with this phenomenon, as well, but on a much reduced scale, of course. Changing your political stripes can be both painful and exhilarating. I suspect Mr. Cohen is finding that out, too.

After you read the reactions of Cohen’s critics in The Guardian, you might want to go over and read what Norm Geras has to say on the subject. Excerpt:

A final point. One confirmation of the fact that Nick Cohen's target is a real one wider than the SWP, is the intense hostility there has been, way beyond that organization, towards the pro-war left. Dip into any relevant comments thread on the Guardian's Comment is Free for a dose of such poison; note that there is a mini-industry in the blogosphere obsessed (some of its denizens to the point of appearing half-crazed) with those they contemptuously call 'the decents'; give some time, if you can bear it, to re-reading through the comment and opinion pages of the liberal press for the last four years. That you were of the left and supported regime change in has just been unthinkable, unassimilable, for many - hence the hostility and the anathemas. It could not be that there was a difficult issue and a difficult choice, with weighty reasons on both sides. If, on the other hand, you consider what volume of critical animus and commentary has been directed from the same quarters at the rank apologists in the anti-war movement, you'll find that it pales by comparison. 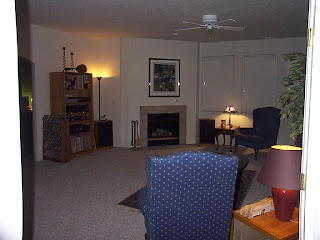 Today’s Pic: Apropos of something… I noticed this small detail in the picture to the right while browsing my photo directories for today’s suitable upload. That song played on RP at 0934 hrs (PST), “The Very Thing…?” Well it just might have been playing when this pic was snapped. That’s the cover of “Bop ‘Til You Drop” propped up on the top shelf of the stereo cabinet. I’m really missing the vinyl today. Really.