More of the Usual Stuff...

Let's begin on a light note: purloined from Cassandra’s comments:

An old prospector walks his tired old mule into a western town one day. He'd been out in the desert for about six months without a drop of whiskey. He walked up to the first saloon he came to and tied his old mule to the hitch rail.

As he stood there brushing some of the dust from his face and clothes, a gunslinger walked out of the saloon with a gun in one hand and a bottle of whiskey in the other. The gunslinger looked at the old man and laughed, saying, "Hey old man, have you ever danced?"

The old man looked up at the gunslinger and said, "No, I never did dance. I just never wanted to."

A crowd had gathered by then and the gunslinger said, "Well, you old fool, you're gonna' dance now," and started shooting at the old man's feet.

The old prospector was hopping around and everybody was laughing.

When the gunslinger fired his last bullet, he holstered his gun and turned around to go back into the saloon. The old man reached up on the mule, drew his shotgun, and pulled both hammers back making a double clicking sound. The gunslinger heard the sound and everything got quiet. The crowd watched as the gunslinger slowly turned around looking down both barrels of the shotgun.

The old man asked, "Did you ever kiss a mule's rear end?"

The gunslinger swallowed hard and said, "No. But I've always wanted to."

H/T: Joatmoaf, who posted that… And there are more, most of which are pretty danged good!

Well, it’s about time… The WaPo reports “Troops Authorized to Kill Iranian Operatives in Iraq.” Buried on the third page of a three-page article are these juicy quotes:

"We were making no traction" with "catch and release," a senior counterterrorism official said in a recent interview, explaining that it had failed to halt Iranian activities in or worry the leadership. "Our goal is to change the dynamic with the Iranians, to change the way the Iranians perceive us and perceive themselves. They need to understand that they cannot be a party to endangering soldiers' lives and American interests, as they have before. That is going to end."

A senior intelligence officer was more wary of the ambitions of the strategy.

"This has little to do with . It's all about pushing 's buttons. It is purely political," the official said. The official expressed similar views about other new efforts aimed at Iran, suggesting that the United States is escalating toward an unnecessary conflict to shift attention away from Iraq and to blame Iran for the United States' increasing inability to stanch the violence there.

There’s a thread running through the entire article that killing and/or capturing Iranians operating in is “provocative” or “dangerous” or “ill-advised.” (Those are my words, by the way.) Really, now. Are we to believe that a “catch and release” policy, which has been ineffective, at best, would somehow deter the Iranians from further direct support of Shiite militias? Or that ignoring the Iranians would make them go away? How frickin’ stupid can we get? (Don’t answer that…)

I was going to quote some Lefty reactions to this development…but I just cannot subject you to meaningless rants and raves from those who suffer from BDS. I will, however, point you to Captain Ed once again. Here’s one paragraph of his take on the new policy:

That realization has given the impetus to the more aggressive strategy. The intended on sending a message with catch-and-release, but the Iranians took a different lesson from it. They knew we knew they were running their own operations in , and saw us as unwilling to take the kinds of tough action needed to stop it. At the same time, they also saw the amount of pushback we got when pursuing a tough sanctions regime against Teheran at the UN, which resulted in a watered-down resolution with "smart" sanctions that will cost Iran little in the short run. Our subtlety in handling their agents was seen as a further sign of weakness.

There’s more, of course, including the Good Captain’s evaluation of the risks associated with killing Iranian agents…such as the Iranian mullahs losing their collective sensibilities and igniting a wider regional war. I agree with Mr. Morrissey: that’s not likely to happen.

There are many reasons people think Mrs Clinton will not be elected president. She lacks warmth; she is too polarising a figure; the American people don’t want to relive the psychodrama of the eight years of the presidency.

But they all miss this essential counterpoint. As you consider her career this past 15 years or so in the public spotlight, it is impossible not to be struck, and even impressed, by the sheer ruthless, unapologetic, unshameable way in which she has pursued this ambition, and confirmed that there is literally nothing she will not do, say, think or feel to achieve it. Here, finally, is someone who has taken the black arts of the politician’s trade, the dissembling, the trimming, the pandering, all the way to their logical conclusion.

Fifteen years ago there was once a principled, if somewhat rebarbative and unelectable politician called Hillary Rodham Clinton. A woman who aggressively preached abortion on demand and the right of children to sue their own parents, a committed believer in the power of government who tried to create a healthcare system of such bureaucratic complexity it would have made the Soviets blush; a militant feminist who scorned mothers who take time out from work to rear their children as “women who stay home and bake cookies”.

Today we have a different Hillary Rodham Clinton, all soft focus and expensively coiffed, exuding moderation and tolerance.

Now, you might say, hold on. Aren’t all politicians veined with an opportunistic streak? Why is she any different? The difference is that Mrs Clinton has raised that opportunism to an animating philosophy, a P. T. Barnum approach to the political marketplace.

And to think there are those who have likened Her Hillaryness to Lady Thatcher. It is to laugh, eh? But, back to the article at hand: You can’t beat the Brits when it comes to the art of the articulate and merciless editorial takedown. There are none better. We Americans tend to be way too nice in print. The blogs, however are a different story, as you well know.

This article in Der Spiegal has been getting a lot of attention in the ‘sphere, as it well should: “Hurray! We're Capitulating!” The author, Henryk M. Broder, provides an interesting and illuminating discussion on the “Mohammed Cartoons” flap, including, but not limited to, the significance of the Muslim protests that swept the globe after the cartoons were published. A key quote:

Objectively speaking, the cartoon controversy was a tempest in a teacup. But subjectively it was a show of strength and, in the context of the "clash of civilizations," a dress rehearsal for the real thing. The Muslims demonstrated how quickly and effectively they can mobilize the masses, and the free West showed that it has nothing to counter the offensive -- nothing but fear, cowardice and an overriding concern about the balance of trade. Now the Islamists know that they are dealing with a paper tiger whose roar is nothing but a tape recording.

Once again, as always: read the whole thing. There is much truth within.

Today’s Pic: Have you seen that paper towel ad on TV? The one where the kid is opening a 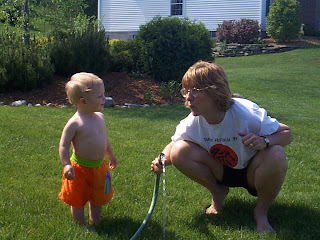 bottle of orange pop in the kitchen and sprays the Mom? And she replies “Tommy!! What are you thinking!?!” The kid looks down, assuming an “uh-oh” pose, knowing he’s gonna get it. Then there’s a quick cut to the Mom, who reaches behind her and pulls the spray attachment from the sink, squirts the kid and says “THIS works much better!” A squirt war ensues…

I can just see The Second Mrs. Pennington pulling a stunt like that. Here she is in our backyard by the kiddie pool, teaching SN3 how to spit water on someone. Notice SN3’s rapt expression. You gotta love a Mom like that… . May, 1998.

OK. This will be the last of the baby pictures… I love ‘em, but then: I would. Your mileage most certainly varies.