It's the Weekend! Again!

So. Big protest anti-war demonstration on The Mall in D.C. today. Curiously enough, there’s nothing on the WaPo’s web page this morning about the demonstration, and only a small article in the NYT. Could it be that both of these august institutions want to avoid being associated with the usual suspects?

Confirmed speakers: Susan Sarandon, Tim Robbins, Jane Fonda, Rev. Jesse Jackson, Reps. Kucinich, Waters, and Woolsey, Bob Watada, and more… (from the “United for Peace and Justice” web site)
Kucinich, Waters, and Woolsey…the Three Stooges of the House. And speaking of Kucinich, didn’t I see him “on the aisle” at the SotU? Smiling and shaking Dubya’s hand, vigorously? Why yes, I think I did! (even though I looked for, but can’t find, photographic proof) The rest of the usual suspects need no comment…their résumés speak for themselves. If you really must, C-SPAN will cover the demonstration, beginning at 1100 hrs, EST. I might drop in for a bit…and I might not. Depends on what my moonbat tolerance level is at that time.
Speaking of C-SPAN… The public affairs channel is also broadcasting parts of the “Conservative Summit” being hosted by National Review in this weekend. I watched a panel discussion between Kate O'Beirne, Kathryn Lopez, Michelle Malkin, Mona Charen, and Laura Ingraham last evening. Here’s Paul Mirengoff on a small portion of this panel discussion:
Michelle reported that her trip to had failed to confirm the pessimism she was starting to feel. She found strong support for the war among the troops she met who, she said, are not ready to come home yet. Everyone agreed that President Bush has done a very poor job of explaining and defending the war. Lopez asked Michelle what the new media can do on this front. Michelle responded, pay more attention to military bloggers.
Emphasis mine, and to that I’ll say: Ah, but we’ve known all of that all along, haven’t we? “We” being those of us who read milblogs.
Very interesting, to say the least… especially the Q&A session following the discussion. There appears to be quite a few dissatisfied conservatives out there, and their dissatisfaction runs the gamut from “too soft on immigration” to a perceived lack of leadership in the congress and all points in between. Ragnar Danneskjold is attending the event and blogging about it at The Jawa Report. And there’s more at The Corner, of course.
Here’s an interesting (and contrarian) point of view about saving for retirement: “Save Less, Retire with Enough.” I’m not sure I buy into the points being made in this article, but one quote struck me as reasonable:
The economists answer that people would get more out of their money by using it when they are younger. “There is risk in saving too much,” Mr. Kotlikoff said. “You could end up squandering your youth rather than your money.”
The whole key is saving enough. Save too little and you wind up saying “Welcome to Wal-Mart!” 45 times an hour to perfect strangers who don’t even see you. Or worse. On the other hand, advice like this is silly:
The starting point for most retirement plans is the so-called replacement rate. It says an American needs an annual income in retirement equal to 75 percent to 86 percent of what he or she earned in the final year of employment. Someone making $100,000 would typically plan for about $85,000 a year in retirement.
Coupling that with a second industry rule of thumb that says retirees should spend no more than about 4 percent of their assets each year to make them last, a typical couple with that level of income should enter retirement with at least $2.1 million in assets, including 401(k)s, I.R.A.’s, stocks and bonds, real estate, cash value life insurance, pensions and Social Security benefits.
Show me an “average” American who goes into retirement with $2.1 million in assets, the key word being “average,” of course. It’s not impossible, especially given the appreciation in real estate values we’ve seen of late, but I submit it’s highly improbable. And as for needing $85K annually in retirement if you made $100K while you were working? I was fortunate enough to be in that income bracket while I was working, yet I’m surviving quite nicely on $24K annually in pensions, plus 401K withdrawals. And a significant portion of that income goes to child-support and alimony. I won’t say how much I withdraw from my 401K annually, but it’s much less than my combined pension income. Then again, I ain’t living in a condo in , either, but I am content.
I’ve had my moments of angst about having “enough,” especially after watching my father get totally wiped out during his three-year, end-of-life, losing war with cancer. That sort of thing makes one think. I’m fond of saying I’d take the 9 mm cure if push came to shove, but that just might be so much hot air. The will to live is strong.
I’m loath to mention this, lest I fall off the wagon. {sigh} But…here goes: I’ve been cigarette-free for three days now, and I haven’t broken into the cigar stash, either. I’ve lost count of how many times I’ve tried to quit; my personal best is abstaining for three months back in the late ‘80s. The acid test, and one that I failed at the end of that three-month run, is spending a night at the bar without smoking. Beer and cigarettes: like love and marriage. One could say that about coffee and cigarettes, too, but so far I’ve beaten that one back. And I don’t even feel like killing anyone. Yet.
Blogroll additions… Dunno why I took so long to add frequent commenter Mike to the blogroll, but I finally got around to it. There are two more additions, as well, and both are from the “Senior Service.” Steeljaw Scribe, a retired naval aviator, writes some great stuff. His regular Friday attraction, “Flightdeck Friday,” features wonderful, extremely well-researched historical articles about naval aviation. The other addition is Chapomatic, who writes some very interesting pieces on things naval and military…most often concerning strategy.
Today’s Pic: This, my friends, is the tiny little two-bedroom house I rented during my stay in Westby, Montana*. By tiny, I mean less than 1,000 square feet, and more like 800. 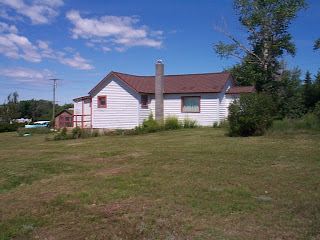 My landlord offered to sell me this house for the princely sum of $5,000.00 US, in 1978. I’ve often regretted not taking him up on his offer. Believe you me, there were LOTS of great good times that went down in that house!! On the other hand, who on God’s Green Earth wants to retire in Westby? The photo was taken during the cross country trip SN2 and family and I took between state and in June of 2000. We made a short detour off US 2 up to the Montana - Saskatchewan border. I just had to show him Westby…
* Wikipedia: As of the census of 2000, there were 172 people, 88 households, and 52 families residing in the town. Rumor had it there were 250 people living there in 1977-78, but I never counted. I could have, though.
Committed to the Inter-tubes by Buck on 1/27/2007 09:43:00 AM