T'was the day before Christmas... 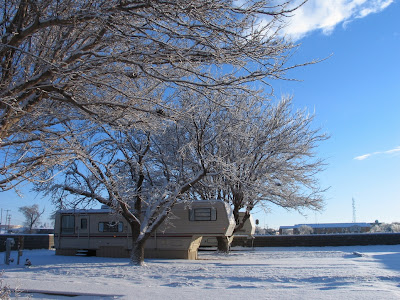 What do IT consultants do at home in their spare time? Why…they decorate for the holidays, of course! 20,000 lights, synchronized to music. Pretty cool, it is!

There was an interesting article in the NYT yesterday about the openness of the U.S. House of Representatives. Titled “The Way to Keep House,” and written by Scot M. Faulkner, the chief administrative officer of the House of Representatives from 1995 to 1997, the article opens with a brief history of some of the sleazy practices that were wide-spread the last time Democrats controlled the House. But, past sleaze isn’t the thrust of the article. Mr. Faulkner hopes the incoming House leadership will take action to make the House more open to the eyes of the American public.

In addition, Democrats should make all House meetings viewable online. The House should install two digital cameras in every committee and subcommittee room, with one facing the rostrum and another facing the witness table. The Republicans rejected an earlier version of this proposal in 1995, saying, in effect, “Not that public!”

This expansion of public access would erode the power of lobbyists who use “insider” information gleaned from committee meetings to justify their fees. If everyone can see the same thing at the same time, much of the lobbyists’ cachet will evaporate. And if Democrats truly want to exercise oversight of the executive branch, something we haven’t seen for a while, Web- and pod-casting will make sure Americans can watch oversight hearings in their entirety without news producers mediating the proceedings.

C-SPAN was way ahead of Mr. Faulkner in at least one regard. On December 14th, Brian Lamb wrote Speaker-Designate Pelosi a one and a half page letter that contained only two requests, and here are a few excerpts from that letter (pdf):

After your party's November 16th leadership elections, you held a news conference in which you pledged to lead a congress committed to openness. In that spirit and as you and lour leadership team work through the many organizational decisions needed for the 110 Congress, we'd like to make two requests of you which we were unsuccessful in pursuing with the incoming Republican majority twelve years ago:

Independent media cameras have long been permitted in congressional committees, yet for nearly 30 years, television cameras in the House chamber have operated under the control of the Speaker. This compromise was crafted long ago to convince wary members to allow congressional sessions to be televised, and in the ensuing years it has become an anachronism that does a disservice to the institution and to the public. During debate, congressional technicians are limited to taking static, head-on shots of the representative who's speaking at the podium. Rules and established practices prevent congressional cameras from taking individual reaction shots or from panning the chamber, leaving viewers with an incomplete picture of what's happening in the House of Representatives.

On , when the House was televised for the first time, Representative Al Gore made a speech on the floor that welcomed Congress to the television age. He predicted that members would become so comfortable with the presence of television that they would soon move to open the floor proceedings to coverage by the independent media.

Under your leadership, Speaker-designate Pelosi, we hope that Al Gore's long ago prediction will finally become reality. Please let us know what we can do to advance your consideration of these two important requests.

And here’s Madame Speaker-Designate’s response, in its entirety (once again, a pdf file; emphasis mine):

Thank you for your thoughtful letter in which you ask that C-SPAN be permitted to cover House floor proceedings with its own cameras and that the House release individual House votes electronically immediately after voting periods have closed. I have asked the Clerk of the House to consider the latter request and report to the House Leadership on whether such a release is technically feasible and, if so, whether it can be accomplished in a manner that preserves the accuracy of the vote tally.

As to your first request, I believe that the dignity and decorum of the United States House of Representatives are best preserved by maintaining the current system of televised proceedings. Under the current practice, every word spoken in an exchange between Members or between the Chair and a Member is broadcast live. This programming informs the American people and ensures an accurate historical record. It has served the American people and the House and Senate well since the advent of televised proceedings nearly 30 years ago.

C-SPAN provides a valuable service in our democracy. I applaud you and the entire C-SPAN cable network for your efforts to inform the American people on the critical issues and challenges that face our great country.

Hmmm. When it comes to openness, it appears Madame Pelosi agrees with her Republican predecessors of 1995: “Not that public!” At least she left the door open for one of Mr. Lamb’s proposals.

You’ll note Mr. Lamb didn’t request the capability to televise every hearing held by House committees and sub-committees. I assume there are simple logistic reasons behind this, after all, the House lists 25 separate committees on its web site…and that doesn’t include sub-committees, ad hoc committees, and leaves out the Senate altogether. C-SPAN couldn’t possibly cover all hearings, even it expanded from its current line-up of three discrete channels to the 40+ required to broadcast all committee hearings. And cable companies simply wouldn’t carry the coverage were it available, anyway. Hell, I can’t even get C-SPAN3 on my system today, let alone C-SPAN17, the House Armed Services Committee Channel, were it to exist.

Enter web-casting. If the Muffys of the world can set up web cams in their bedrooms, the House (and Senate) can surely set up two digital cameras in each hearing room as Mr. Faulkner suggests and webcast all proceedings, live. It wouldn’t be all that difficult to make the proceedings permanently available on-line, either. If YouTube and Google can archive petabytes of video, why can’t the government?

Unless, of course, the answer is “not that public!”

Today’s Pic: Another brrrr-invoking view of the neighborhood from this past Wednesday. The fifth-wheel in the foreground is the residence of one of the student cowgirls, who’s back home on Christmas break. .