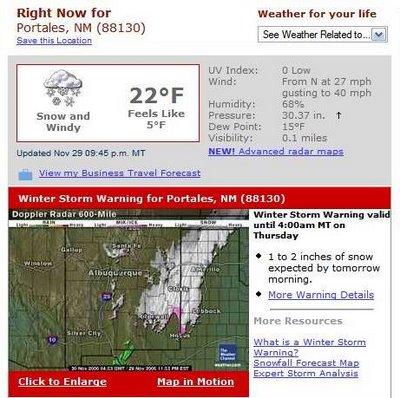 The above is what the WX Channel’s web site said about our weather just before I turned in last night, and here’s the “warning” that accompanied the graphic.

THE NATIONAL WEATHER SERVICE IN HAS ISSUED A WINTER STORM WARNING...WHICH IS IN EFFECT UNTIL THURSDAY. THE WINTER WEATHER ADVISORY IS NO LONGER IN EFFECT.

AN UPPER LEVEL DISTURBANCE MOVING SOUTHEAST THROUGH CENTRAL NEW MEXICO WILL COMBINE FORCES WITH A COLD FRONT EXTENDING FROM WEST TO EAST ACROSS SOUTHEASTERN NEW MEXICO TO PRODUCE HEAVY SNOW AND BLOWING SNOW THROUGH TONIGHT.

FOR DE BACA......AND ...EXPECT ADDITIONAL SNOW TO BRING STORM TOTALS TO 2 TO 5 INCHES. LOCALLY GUSTY WINDS AND BLOWING SNOW WILL REDUCE VISIBILITIES TO NEAR ZERO AT TIMES.

SNOW WILL TAPER OFF THURSDAY MORNING WITH DECREASED WINDS TO EASE THE WINTER STORM DANGER...AND LEAVE UNSEASONABLY COLD TEMPERATURES IN ITS WAKE.

True to form, I woke up this morning to see there’s only about a half-inch of snow on the ground. Gloom ‘n’ Doom, unrealized yet again. WX forecasters: there are no greater pessimists in life. It is bloody cold, though!

Here’s what I woke up to this morning:

You’ll note we had some pretty stiff winds last evening, and I think the wind-chill number in the graphic is understated. The winds have diminished a bit this morning, but as I said: it’s still bloody cold. I popped outside this morning to read the gauge on my propane tank, and I’m good-to-go for another 24 hours or so before I’ll need to give Albert The Propane Guy a call. My “inside gauge” is an LED read-out that’s calibrated in fourths…and I’m showing a quarter of a tank. It can be a problem if one relies solely on those LEDs for tank status, because you can go from 25% to Zero instantaneously if you don’t pay attention. Not good. One worries about that sort of thing when it gets really cold. 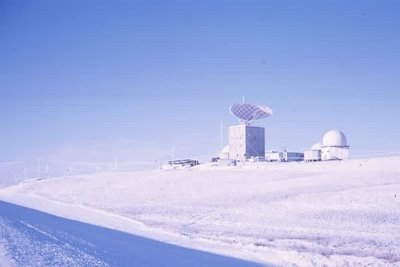 The very definition of cold. “The lowest recorded temperature was -50°F in 1983.” No kidding. I saw temps of -35 degrees-- absolute, not wind-chill -- while I was stationed there, "there" being Fortuna Air Force Station, ND. Coldest weather I have experienced, ever. Makes one wonder why people would choose to live in such a place.