This is Becoming a Habit....

The late-in-the-day posting, that is. Chalk it up to screwed up circadian rhythms. Poor excuse, I know. But it is what it is...

Tony Snow is good! And about as different from his predecessor, Scott McClellan, as two press secretaries could be. I haven’t been watching a lot of White House press conferences these days, but Outside the Beltway has a three minute and 28 second video clip of Snow just demolishing that relic from the Pleistocene Era, Helen Thomas. (If you don’t want to watch the video, the transcript of the entire presser is here.)One wonders why her press credentials weren’t revoked a long time ago. But now that Snow’s Da Man, I suspect she’s being kept around for entertainment value…and she offers up a lot of that. And while we’re on the subject of Thomas, the Media Blog at National Review has an interesting illustration of Lefty revisionism, which may be filed under “We’re Never Wrong, Ya Know.”

Charles Krauthammer gets it absolutely correct in his WaPo editorial today, on all counts. It remains to be seen if will be able to get the job done against Hezbollah before the clock runs out. Not the military clock, mind you. I have no doubt the IDF can and will succeed; from what I’ve read lately the IDF estimates another week is required to achieve their military objectives. It’s the diplomatic clock I worry about. The longer military operations last, the more time Hezbollah and their apologists have to distribute video of demolished apartment blocks, wailing women, and cratered airport runways. And that video, sadly, has substantial impact on our Western sensibilities. It’s the same old movie, played all too effectively in every previous Arab – Israeli conflict. While I hope it’s different this time, past experience would indicate not.

In the comments to one of my posts the other day, Son Number One made the point that we’re not at war with Islam in general, just the fanatics of Islam’s fundamentalist, radical, jihadist branch. I replied that, although I’m trying very hard to keep that view, I’m not so sure. One reason for my uncertainty is the general lack of public opposition to the jihadis by mainstream or moderate Muslims. And, just in the nick of time, we get this editorial by Youssef Ibrahim in The New York Sun:

Yes, world, there is a silent Arab majority that believes that seventh-century Islam is not fit for 21st-century challenges. That women do not have to look like walking black tents. That men do not have to wear beards and robes, act like lunatics, and run around blowing themselves up in order to enjoy 72 virgins in paradise. And that secular laws, not Islamic Shariah, should rule our day-to-day lives.

The collective "nyet" was spoken by presidents, emirs, and kings at the highest level of government in Saudi Arabia, Egypt, Bahrain, Qatar, Jordan, Morocco, and at the Arab League's meeting of 22 foreign ministers in Cairo on Saturday. But it was even louder from pundits and ordinary people.

Perhaps the most remarkable and unexpected reaction came from Saudi Arabia, whose foreign minister, Prince Saud Al-Faisal, said bluntly and publicly that Hezbollah's decision to cross the Lebanese border, attack Israel, and kidnap its soldiers has left the Shiite group on its own to face Israel. The unspoken message here was, "We hope they blow you away."

All in all, it seems that when decided to go to war against the priestly mafia of Hamas and Hezbollah, it opened a whole new chapter in the Greater Middle East discourse. And is finding, to its surprise, that a vast, not-so-silent majority of Arabs agrees that enough is enough. To be sure, beneath the hostility toward Sheik Nasrallah in Sunni Muslim states lies the deep and bitter heritage of a 14-century Sunni-Shiite divide, propelled to greater heights now by fears of an ascendant Shiite "arc of menace" rising out of Iran and peddled in the Sunni world by Syria.

The sooner this is settled the better.

Encouraging, to say the least.

I saw on the Weather Channel last evening that 19 states are experiencing a run of 100 degree (or more!) weather. Yeah, it’s hot. Note our average temp for the month, and the fact we’ll get a breather Saturday. 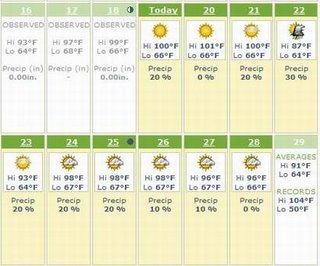 I really feel for those folks that are experiencing the heat plus high humidity. Been there, done that, and it ain’t fun. All you can do is grin and bear it. And turn up the AC.