Lileks is taking the kind of trip I took my first nine months on the road: a through small towns in , on his way to his high school reunion in . The only differences between his trip and my trip(s) are his narrative is a Helluva lot better and so are his pictures. Other than that? Pretty much the same…

Did you know this year is the 50th anniversary of the interstate highway system, aka the “Dwight D. Eisenhower National System of Interstate and Defense Highways?” Of course you did. (Not everyone is impressed. We need a “new vision.”) I won’t comment upon or mention the usual clichés about the interstates (the destructor of small towns, the homogenization of the culture, the long boring expanses of nothing much to see), besides, I already have. Instead, just consider what an engineering marvel the interstates are. No other nation of comparable size —I’m looking at you, Russia, China, India— has anything to compare, unless it would be a railroad. Yes, has its autobahns, has autoroutes, and has the autostrada, remarkable highways all, especially for the speed you can achieve and maintain. But each of those countries is comparable to a single state in the , you can (and I have) have breakfast in , lunch in , and dinner in , with no trouble at all. And throw in a snack in , if you so desire. It’s truly a small world, in . The sheer size of our interstate highway system is remarkable and impressive. What’s also impressive, to my way of thinking, is we have retained and maintained our non-interstate highway system. And for me, the Blue Highways are where the action scenery, history, and charm of are. Providing it’s the going and not the “getting there” that’s important…

Further, random, thoughts on Sgt. Kassin’s memorial service… Did you take a close look at the PGR pictures (more pics below) from yesterday? The group is mostly older guys and gals, with a few exceptions, of course. And most of those “older guys” are vets. It’s been 33 years since we pulled out of (and about 40 years since the “height” of our involvement), and it shows on the faces of these guys. We’re getting old. Some of us are wearing it well, others aren’t. Just sayin’.

And also in the “just sayin’” department: I’m beginning to think I’m a walking anachronism. Yesterday I trotted out one of two suits I kept when I left the working world (weddings and funerals, ya know), unwrapped a dress shirt, picked out a tie, shined up my Johnston & Murphy’s, and made myself presentable for the occasion. I needn’t have bothered. Aside from Sgt. Kassin’s father and the two ministers I was the only male in a suit yesterday (out of about 200+ men), if you discount the one Air Force couple who came in their Class A uniforms. And I’ll also add that only about ten percent of the men added a tie to their (ahem) formal attire. Jeans ruled the day, and yes, there were more than a few tee shirts, too. I find this sad and troubling. There’s a lot to be said for formality that used to accompany our rituals. It’s vanishing, and that is not a good thing. And there’s the Old Fart commentary for the day.

The Army was conspicuously absent from yesterday’s memorial service. I think I know the reason; yesterday was a memorial service for the family, the actual burial takes place in next weekend. I’m certain—no, I know— the Army will be there for the burial. But it makes one wonder (or me, at least) why the bureaucracy seems so inflexible that it couldn’t detail at least a couple of troops to attend both services.

And finally, I didn’t describe the military honors given to Sgt. Kassin and his family yesterday by the Cannon AFB Honor Guard. If there was a single point in time where I came close to “losing it,” it was during the presentation of the flag to Sgt. Kassin’s parents by the commander of the Honor Guard. I’ve seen this particular ritual many times. It changes only depending on the venue, that is, if the ceremony is performed grave-side, or indoors. The presentation of the flag is symbolic of the nation’s gratitude for the service and sacrifice of the service member and the family. It is a solemn moment, and if that doesn’t strain your emotions, I don’t know what would…

(Just a note: Blogger is slow today. It took 45 minutes to upload the three pics below. I keep telling myself: “but it’s free.” Free, yes. And abysmally slow at times, too.) 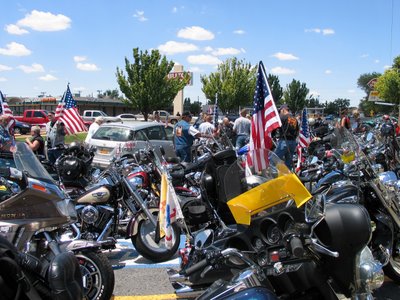 Lotsa Hardware! (At the church) 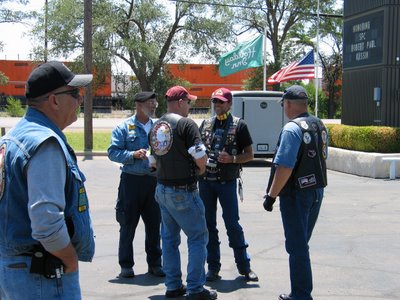 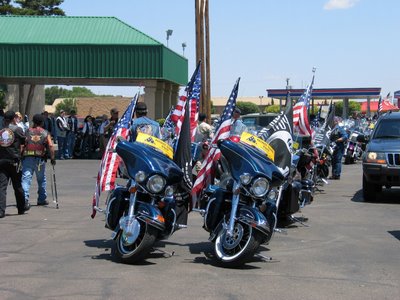