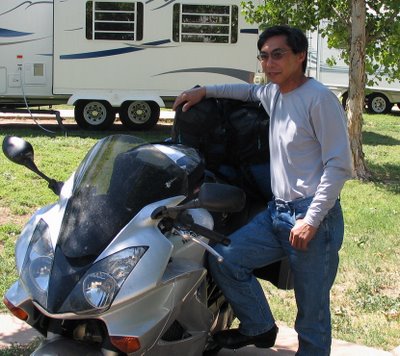 That’s my buddy Lee in the pic above. He looks pretty good for a guy pushing 50, doesn’t he? The bike? A 2003 Honda VFR 800 Interceptor. Lee got in pretty late Thursday evening…well after 2300. It was a long day’s ride from to P-Town (15 hours), especially considering the triple-digit temps and high winds we experienced. We had a couple of beers and then drove over to the Big(ger) CityTM around 1:00 a.m. for huevos rancheros at an all-night eatery (P-Town closes down around 2300, the only all-night restaurant is Mickey Dee’s). Lee’s visit was short but sweet. Lots of reminiscing went down, mostly about old flames followed up with “where are they now?” conversations. Ah, lost youth…
Here’s an interesting list, illustrated with album cover art (thumbnails) for The Top 500 Albums of the Last Millennium. The tag line for the list sez “Most significant albums recorded in previous millenium.” Heavy on Beatles and Stones and light on hip-hop (or rap, or whatevah the current term is), with a few surprises. I own nine of the top ten and 55 of the top 100. I looked around the site for a write-up on the criteria used to select the Top 500, found nothing. Same with the “according to who?” question. Still, the list is fun to browse. (h/t: Rodger)
Natalie Maines, quoted in The Telegraph ():
"The entire country may disagree with me, but I don't understand the necessity for patriotism," resumes, through gritted teeth. "Why do you have to be a patriot? About what? This land is our land? Why? You can like where you live and like your life, but as for loving the whole country… I don't see why people care about patriotism."
You’re free to express yourself as you please, Darling Natalie, and I, in turn, am free to not buy your frickin’ music. Ever.
Insulting the President of the before an audience on foreign soil is, in my eyes, relatively small potatoes compared to questioning the very concept of patriotism. By making that statement above, Natalie Dear revealed a shocking lack of understanding of one of the most basic American moral values, to wit: personal responsibility to, and respect for, the nation. In a time of war, patriotism may also be defined as the personal obligation to support and defend the country. In other words, patriotism is the deep-seated feeling that what we have…our traditions, our history, our values, our laws, our society…is not only worth defending, it’s something we must defend. And Natalie apparently doesn’t believe that is true.
I suppose our collective memory as a nation is short, because the Chicks new album was number one on the Billboard charts the week after its release. On the other hand, I have read that dates on the Chicks’ current tour are being cancelled due to poor ticket sales, one of those cancelled dates was supposedly in . The fact concerts are being cancelled due to poor sales is good news.
The three Dixie Chicks are still popular, highly visible entertainers. And, like it or not, entertainers are powerful role models in our culture. Entertainers achieve power through sales. Less sales, less power. Poor sales, little or no power. Recording contract cancellations follow, as do interview opportunities, appearances on late night talk shows, and other publicity, thereby denying these people a platform for spreading their views. Patriotism has been under assault for a while; the three Chicks are just part of a small, albeit very vocal group of folks assailing patriotism. I don’t care to support people who denigrate the core values of our country, and I damned sure don’t believe the Chicks’ values in this one specific but important area are worthy of respect or emulation. In this regard the Chicks are not suitable role models, period.
It’s a personal thing for me. I will not ever, ever spend my money to directly or indirectly support views I hold to be reprehensible. And that goes for Neil Young, too.
Committed to the Inter-tubes by Buck on 6/17/2006 11:36:00 AM

Email ThisBlogThis!Share to TwitterShare to FacebookShare to Pinterest
Labels: Culcha, Mo'sickles, Playin' In the Mud