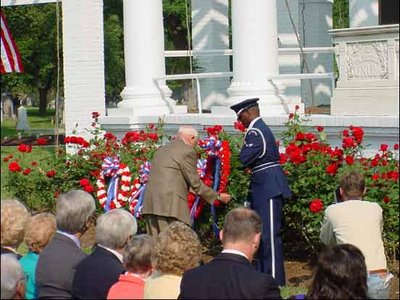 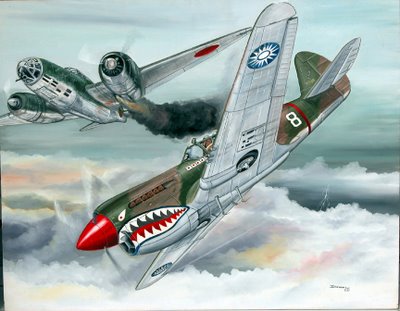 I saw an item on CNN’s Headline News this morning…a brief video of a wreath-laying ceremony at by members of the 14th Air Force Association, better known as The Flying Tigers of World War II. The photo above is last year’s ceremony…I couldn’t find a photo of this year’s event anywhere on the web.
-- World War II ended six decades ago. Veterans are now dying at a rate of more than a thousand a day.
Survivors of one group and their loved ones gathered at Saturday to pay tribute to those who've passed away.
Ron Witsford came from to honor his grandfather Master Sgt. Lawrences Kimes.
"He was in World War II and I think that's probably what I'm most proud of," Witsford said.
Kimes was one of 118 members of the legendary Flying Tigers who died last year.
He said his grandfather, like many veterans, didn't talk much about his wartime experiences. He was simply too modest.
World War II era Air Force Secretary Donald B. Rice offered more detail.
In a Presidential Unit Citation, Rice wrote that between to , the American Volunteer Group Flying Tigers: "displayed exceptional valor in compiling an unparalleled combat record. Although never manned with more than 70 trained pilots nor equipped with more than 49 combat ready P-40 fighter aircraft, this volunteer unit conducted aggressive counter-air, air defense and close air support operations against numerically superior enemy forces occassionally 20 times larger, members of the American Volunteer Group destroyed some 650 enemy aircraft while suffering minimal losses. Their extraordinary performance in the face of seemingly overwhelming odds was a major factor in defeating the enemy invasion of ."
"He was able to make it back," Ron said of his grandfather. Kimes died at age 89.
(Story by area TV station WTOP)
The story of the American Volunteer Group is but one of many illustrious pages of Air Force history and tradition. Military aviation buffs are familiar with the AVG’s history and accomplishments. Those of you who are younger may not know of them, or are only vaguely aware of who they were and what they did. Here’s a starter, from the Official USAF 14th Air Force home page (history):
The Beginning-the American Volunteer Group
Preceding the establishment of the 14th Air Force, there was a slow build-up of American air strength in . In 1937, Claire L. Chennault, a retired officer in the United States Army Air Corps, accepted the gigantic task of reorganizing the Chinese Air Force. In 1941, President Roosevelt signed a secret executive order which permitted Chennault to organize assistance. A group of volunteers (approximately 100 pilots and 150 support personnel) formed the American Volunteer Group (AVG). The AVG was trained by Chennault in on innovative combat tactics. Later, one hundred crated P-40 aircraft, rejected by the British as obsolete, were shipped to . To enhance esprit de corps, aircraft noses were painted to symbolize the grinning mouth, flashing teeth and the evil eye of the tiger shark. Subsequently, journalists used the tagline "Flying Tigers" which rapidly caught on worldwide.

Fighting against numerically superior forces, the AVG compiled one of the greatest records of the war before it was discontinued in 1942. According to official Chinese statistics, confirmed losses to the enemy by the AVG were 268 enemy aircraft destroyed and another 40 aircraft damaged against 12 losses for the AVG. In a separate report, Chennault credits the AVG with 294 enemy aircraft shot down.
There’s much, much more. A better place to learn about the AVG is here—everything you should know about the Flying Tigers, including photos, war stories, and “unofficial” history. These men are passing from our company rapidly. Memorial Day weekend is the perfect opportunity to reflect on their glory and remember them.
While I was searching for information about the AVG and the wreath-laying ceremony at , I came across this article. A short, yet amazing, OIF story from 2003 and one I hadn’t read before. Perhaps it’s new to you, too. The first three grafs:
-- Three weeks into the fighting in , American ground troops were under intense enemy fire near downtown when the call went out for air support.
One of the aircraft dispatched that dreary, gray morning was flown by Air Force Captain Kim Reed Campbell, a fighter pilot known by the call name "Killer Chick." , 28, is 5 feet 6 inches tall and weighs barely 100 pounds.
Within minutes, dropped her A-10 Warthog from the clouds and was staring into the firefight on April 7. On 's final pass her jet took a crippling hit, most likely from a surface-to-air missile, which disabled the plane's controls and put the pilot to the test. She managed a dramatic, safe landing.
“Killer Chick.” I don’t know about you, but I think the captain (probably major, by now) has a wonderful sense of humor. I think I’d like to have a few beers with this woman. On me.
Committed to the Inter-tubes by Buck on 5/27/2006 11:28:00 AM