So, what do we do when our muse leaves us for parts unknown?  We post a re-run, that's what we do.  Like this:

A Couple of Milestones...Plus Ruminations on the Past

It’s the eclecticism… Or, yet another reason I listen to RP almost exclusively these days. From RP’s play list this morning:

8:21 am - Frank Sinatra - The Coffee Song
8:19 am - Bottle Rockets - Coffee Monkey
8:14 am - Dire Straits - Expresso Love
“Coffee Monkey” kicked off just as I was draining my first cup; I come back to the desk with my second cup and Sinatra’s on. Oh, Yeah! I just don’t have this sort of wide variety in my music collection. Bill and Rebecca do. And they use it, too.
―:☺:―
A couple of milestones passed me by this week…milestones that should be noted.
First: to use the military vernacular, SN2 is working for half-pay as of this past Friday, the 18th of January. That means he has over 20 years of service now, for you non-military types. One is eligible to retire at 50% of base pay at 20 years, ergo: working for half-pay. He won’t retire anytime soon, though. But with the passing of this milestone, planning for his post-military life has begun. Transitions, and all that. Not to mention the fact I’m feeling pretty old, yet again. To think I have offspring that could retire…Aiiieee!
Second: Yesterday marked the passing of one full year since I lit my last cigarette. I still miss ‘em, too. Badly. But I ain’t going back…
―:☺:―
Long-time readers of EIP know there’s a guy by the name of Dan who hangs around EIP and comments occasionally. Dan and I go back nearly 40 years and he is my oldest friend (speaking of the duration of the relationship and not his age…although he can qualify in that space, too). We met at Wakkanai AS, Japan in 1968 or 1969 and we were both in the same racket, job-wise…which is to say we were both 303X2s, the USAF job code for aircraft control and warning radar technicians. We were also drafted by the Air Force for a “special duty identifier” job that took us out of Air Defense Command’s radar business and into USAFSS’ spook biz, beginning in Wakkanai and leading a couple of years later to Sinop, Turkey. Dan and I worked together, drank together, rode motorcycles together, and raced ‘em all over Hokkaido, too. Here’s a pic of Dan sitting along side of a road somewhere near Wakkanai at some unknown time in ‘69, framed by his Yamaha DT-1 (on the left) and mine… on the right. 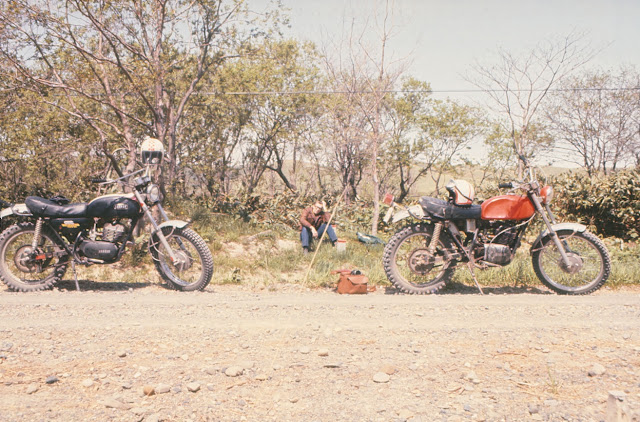 Dan and I both loved Wakkanai for a number of reasons, not the least of which was, in retrospect, the nature of the job we did. And the bike racing and associated carousing, of course. We both managed to wrangle second tours at Wakkanai after we rotated back to the US in 1970, and we returned to Wakkanai in 1971. Alas, the Air Force had other plans for Wakkanai and for us. In a strange turn of events, USAF announced Wakkanai would be closing shortly after Dan and I returned there in late 1971. The unusually rapid base closure (lights out by the end of 1972, as it were) meant all personnel would be re-assigned to other bases, and Security Service flew in a team of personnel specialists in to handle the short-notice re-assignment process. Dan and I got the short, dirty end of the re-assignment stick. We had two choices: take an assignment to Sinop, Turkey and remain in USAFSS, or turn down Sinop and “get released to Air Force.” While Sinop wasn’t exactly a garden spot assignment, the possible alternatives that came with being released to Air Force for world-wide assignment were decidedly worse. Much worse…like Alaska. So, we opted for Sinop…returning to the US for a short leave before heading off to Turkey for a one-year remote tour in Beautiful Sinop by the Sea.
After our leaves were up Dan and I met in New York and caught Pan Am’s legendary Flight 002 for Istanbul…with an interim stop in Frankfurt. Dan is pictured below in a shot taken during the short layover in Frankfurt. 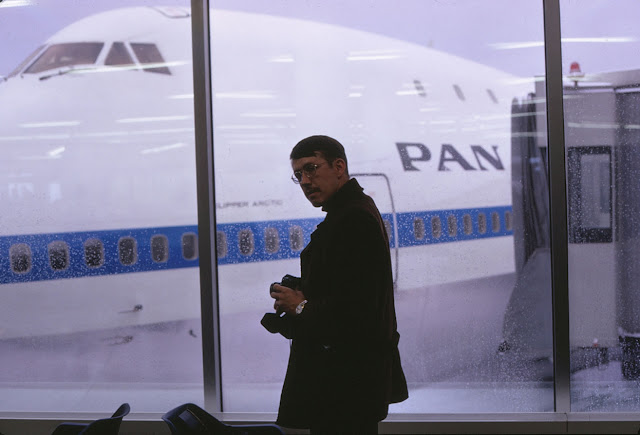 After Istanbul we caught a THY Fokker to Samsun, Turkey, and then lucked out and caught the Army’s twin-engined Cessna mail plane to Sinop. I say “lucked out,” because the alternative to the 30-minute mail plane flight was a four-hour bus ride over the tortuous and quite scary mountain road between Samsun and Sinop. Dan and I would make that bus trip a couple of times later on during our tour, but that’s quite another story… and one that won’t be told outside of the bar and amongst good friends. To protect the innocent, of course. Not to mention the guilty…
So. There we were…on the beautiful Turkish Black Sea coast for one long, long year. This is the view of the town of Sinop from The Hill, as the base was known. 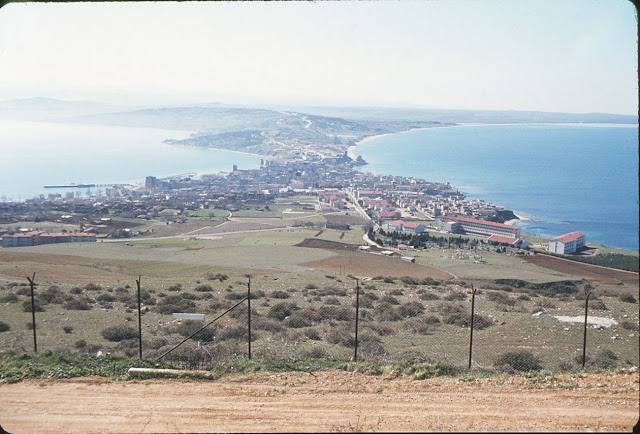 The base at Sinop was officially named “Sinop Common Defense Installation (CDI),” which was a euphemism meant to imply the American and Turkish armed forces operated the installation jointly. Which was sorta true, as we had a small Turkish Army garrison collocated with us, but the Turks were separated from the “US side” by high chain link fences, topped with barbed wire. NO ONE got into the US operations compound without some serious security clearances…period. The things we did in there were among the most sensitive of all US intelligence activities at the time. The base itself was run by the US Army Security Agency (ASA) and was otherwise known as TUSLOG Detachment 4. The Air Force was a tenant unit on the base, and had the dual designations of TUSLOG Det. 204 and 6934th Security Squadron…but you never saw the 6934th designation… anywhere… even on base at Sinop. But…that was work. Let’s not go there. Here’s a pic of a small portion of the antenna farm at Sinop, taken near the USAF barracks. That water-tower looking thing is actually a large electronically-scanned antenna array, and was part of the system Dan and I worked on. 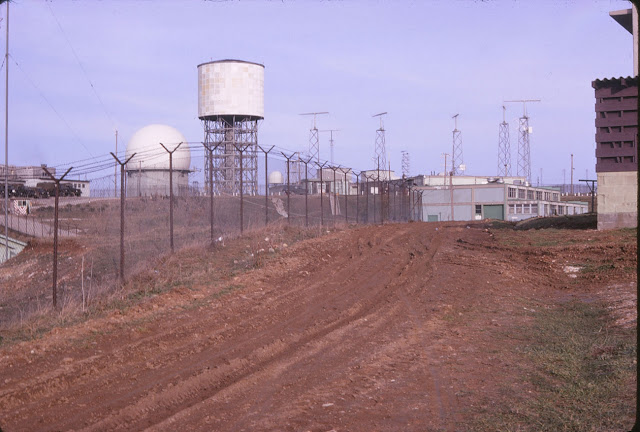 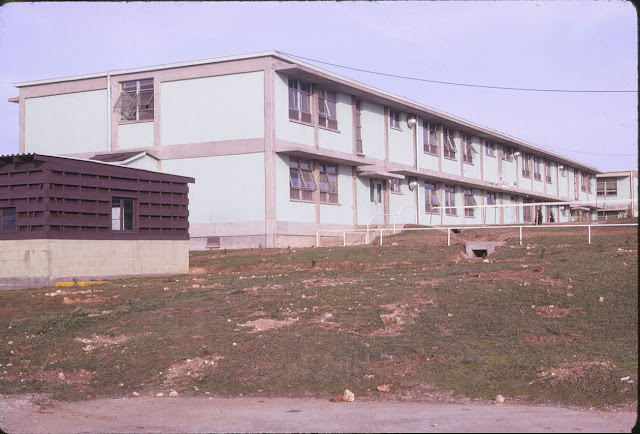 And this is the dorm room Dan and I shared… 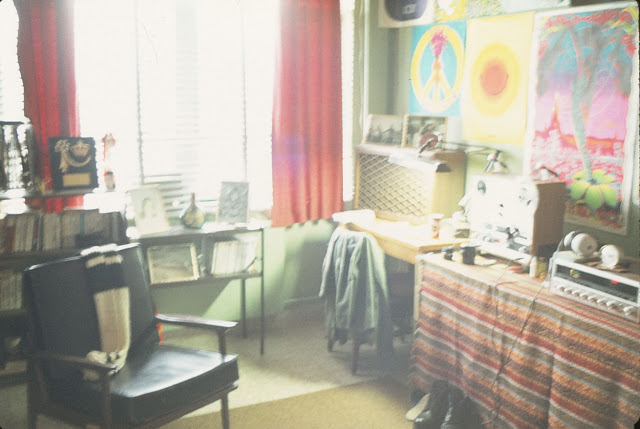 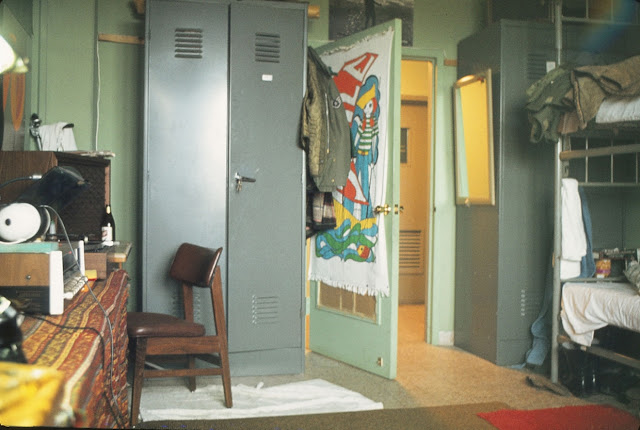 So. Our year at Sinop passed rather uneventfully and oh-so-slowly, it seemed…at the time. Now that I’m gifted with hindsight, it was over in the blink of an eye. Dan I went to work, drank a bit lot more than we probably should have, went exploring in the town of Sinop…which has some remarkable ancient ruins and an even more remarkable history. We both hired on to the local closed circuit radio station as volunteers and hosted a late nite rock ‘n’ roll show interlaced with snappy patter and the like. We spent lazy weekend days during the summer on our very own (Army-run) private beach, drinking beer and lusting after what few American women there were in the area. We went down to the Yeni Hotel on the weekends and drank lousy Carlsberg beer while watching European tourists get off the White Boat and walk around Sinop for an hour or two before continuing on their cruise of the Black Sea. And we took that bus ride to Samsun a couple of times for wild nights of raki-fueled debauchery. To quote Dickens: “It was the best of times, it was the worst of times.” In spades, Gentle Reader, in spades. I may have had better years in my life, but danged few…and none come to my mind at the moment. Such is the nature of nostalgia, eh?
To close…Here’s another good Sinop-related site…best I’ve found, actually… that focuses on the military (albeit Army) side of Sinop. The owner of this site preceded Dan and I by about a year and has written a detailed narrative about life “on The Hill” supplemented with lotsa good pictures.

Just to update this post... SN1 is also working for half-pay these days, which means BOTH sons could retire if they had a mind to do so.  I don't think that will happen anytime soon, though.  A further update: I'm still off the ciggies (seven and a half years now) as well, and won't ever go back.
Committed to the Inter-tubes by Buck on 8/19/2014 12:03:00 PM