(Sigh)  I have a classic case o' The Blahs today and don't feel like doin' much o' anythang, which includes writing a new and riveting blog post.  Or even goin' shopping, which is sumthin' I MUST do later on today, assuming the Motivation Fairy flits in and dusts me with the appropriate stuff.  Or hits me with her wand, or however that works.  There are mysteries in life and this is one of 'em.  (08-12-2012)

... for we are decidedly short on motivation and our left arm is throbbing.  In re: the left arm... we got our flu shot today, nuff said about THAT, I suppose, except this year's vaccine stung a lot goin' in and hurts like hell several hours later.  I'm such a wimp...  (10-12-2011) 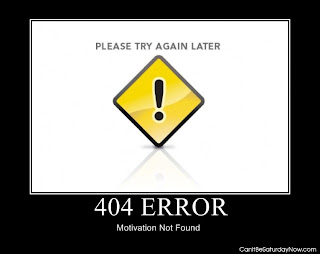 Aiiieee.  We are becalmed in the worst blogging doldrums I've experienced in quite a long while.  Mebbe I'm experiencing some sorta post-headshot let-down, or some other semi-obscure form of ennui.  It's pretty serious, whatevah it is, as I can't seem to draw any sort of inspiration from anywhere.  (05-04-2011)

Towards the end of my working life there was a point in time I took to calling in well whenever "things" got a bit too much.  Which is to say something like this hypothetical phone call:

That was about the way it went the first time I pulled that stunt.  I didn't do it all that often, mind you, mebbe once or twice a year and NEVER when there was "stuff" going on that required my presence.  I usually did it after some sorta death march was completed, which is to say the kind of activity that required an endless procession of 12 to 14 hour days.  It was my own personal form of R&R, in other words.  I never once pulled that trick in the Air Force, needless to say.  The military, even the AF, tend to take a rather dim view of that sort of attitude.  There's that "duty" thang, yanno?  But it isn't so in the civilian world, given you have the right sort of leadership.  And I did.


We're calling in well today here at EIP.  While I feel REALLY good I also have zero motivation my inner eight year old pulling his usual stunt.  Even My Buddy Ed In Florida seems to be on hiatus at the moment, having failed to send me any of his drollery.  Mebbe everyone is kinda-sorta calling in well today.  (09-30-2010)


So... we were sitting here wondering where the Hell our Muse has traipsed off to, given as how she apparently decamped sometime over the long weekend. It's sufficient to say our blogging motivation levels have dropped off considerably over the last 48 hours or so... we've just been going through the motions for the last couple of days. (02-18-2009)

And you know there may be more, but I got tired o' scrolling down through old blog posts that say the same thing: we are NOT motivated.  I absolutely HAVE to go shopping today unless I wanna call up my good friends at Domino's when it's time for dinner.  It's hot outside, too.

Email ThisBlogThis!Share to TwitterShare to FacebookShare to Pinterest
Labels: Blogging