"Return With Us Now to Those Thrilling Days o' Yesteryear," Or, the Sunday Re-Run

I'm taking a lil different approach today, to wit: instead of choosing an entire post from our back pages I'm gonna post some excerpts.  Coz there WAS a time when my daily post covered a lot o' ground... oftentimes two or three or four topics.  First, from 09/21/2006:

Time for a lil culture commentary in the form of “commercials I hate.” The last ad I ranted about was that supremely irritating “Head On” ad, with its obnoxious, thrice-repeated female voice over. But…it’s only irritating. This ad from Ford, however, hits me where I live and goes beyond irritating into the realm of cultural impact. Have you seen it?

I’m not the only one that’s upset. The Family Scholars Blog (dead link) has this to say:

‘Course the whole thing is “good divorce” fantasy. Mom and dad split up but still take the kids to the beach and the farmer’s stand. The only note from the child’s point of view is the telling (and surprisingly accurate) look of apprehension on the son’s face right before they drop off dad. I wonder, is Ford trying to reach divorced moms with this ad? Perhaps. But I think the viewers even more susceptible to it might be moms who imagine themselves unhappily married and fantasize that a “good divorce” will make it all better. And Ford understands!

Well, that and the “mainstreaming” of divorce. It’s acceptable these days…Hell, it might even be better than staying married, ya know? That woman driving doesn’t look all that unhappy, and Dad? Well, he’s just grateful Mom “invited him this weekend.” So, damn the impact on the kids. Damn the impact on either Mom or Dad, whichever one didn’t want the divorce, and I submit that most divorces involve one party that is less than thrilled at the thought of the emotional and/or financial devastation divorce brings.

I understand reality. I understand 50% of American marriages end in divorce. I understand “when love goes missing,” and I know not every marriage can be saved. I don’t understand why a frickin’ car company would use an all-too-common modern-day tragedy to flog their products. I can’t imagine the focus group that nodded appreciatively when shown this ad, and I can’t imagine any executive with just the normal amount of common sense approving the ad for broadcast. If this ad, with its “sensitive” depiction of a divorced couple, tips just one family into divorce court then Ford has done the country a major disservice.

Natalie Maines, quoted in The Telegraph (UK) (another dead link):

"The entire country may disagree with me, but I don't understand the necessity for patriotism," Maines resumes, through gritted teeth. "Why do you have to be a patriot? About what? This land is our land? Why? You can like where you live and like your life, but as for loving the whole country… I don't see why people care about patriotism."

You’re free to express yourself as you please, Darling Natalie, and I, in turn, am free to not buy your frickin’ music. Ever.
Insulting the President of the United States before an audience on foreign soil is, in my eyes, relatively small potatoes compared to questioning the very concept of patriotism. By making that statement above, Natalie Dear revealed a shocking lack of understanding of one of the most basic American moral values, to wit: personal responsibility to, and respect for, the nation. In a time of war, patriotism may also be defined as the personal obligation to support and defend the country. In other words, patriotism is the deep-seated feeling that what we have…our traditions, our history, our values, our laws, our society…is not only worth defending, it’s something we must defend. And Natalie apparently doesn’t believe that is true.
I suppose our collective memory as a nation is short, because the Chicks new album was number one on the Billboard charts the week after its release. On the other hand, I have read that dates on the Chicks’ current tour are being cancelled due to poor ticket sales, one of those cancelled dates was supposedly in Houston. The fact concerts are being cancelled due to poor sales is good news.
The three Dixie Chicks are still popular, highly visible entertainers. And, like it or not, entertainers are powerful role models in our culture. Entertainers achieve power through sales. Less sales, less power. Poor sales, little or no power. Recording contract cancellations follow, as do interview opportunities, appearances on late night talk shows, and other publicity, thereby denying these people a platform for spreading their views. Patriotism has been under assault for a while; the three Chicks are just part of a small, albeit very vocal group of folks assailing patriotism. I don’t care to support people who denigrate the core values of our country, and I damned sure don’t believe the Chicks’ values in this one specific but important area are worthy of respect or emulation. In this regard the Chicks are not suitable role models, period.
It’s a personal thing for me. I will not ever, ever spend my money to directly or indirectly support views I hold to be reprehensible. And that goes for Neil Young, too.

The Wiki has a pretty good recap of the whole Dixie Chicks brouhaha just in case yer memory needs refreshing.

Back in the day when I first started blogging I posted a "Pic of the Day" which was usually found at the bottom of the day's post.  That was if I posted a photo at all... my posts for the first year or so are strangely devoid of photos.  But then again: we were learning, weren't we?  Here's one of those photos of the day, from 07/26/2007: 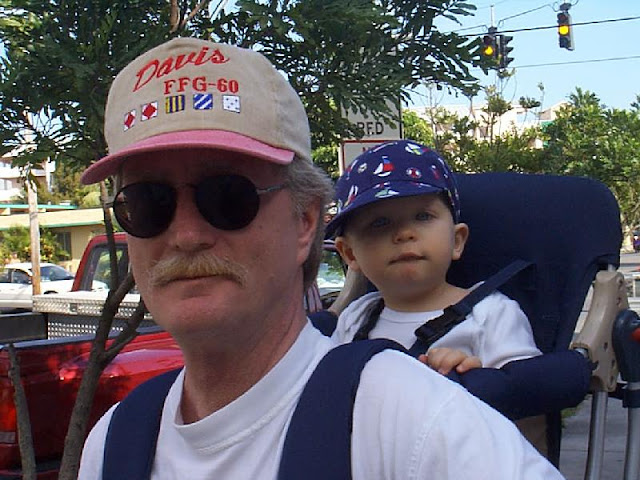 Today’s Pic: For the Children! This is perhaps my absolute favorite pic of SN3 and I. I may have posted this before, but whatever…everyone goes into re-runs occasionally.
Key West, FL. March, 1998. And my our (? - The Second Mrs. Pennington took the pic) 52nd digital photo…ever.

Email ThisBlogThis!Share to TwitterShare to FacebookShare to Pinterest
Labels: Blogging, Get Off My Lawn