Eyes On the Skies 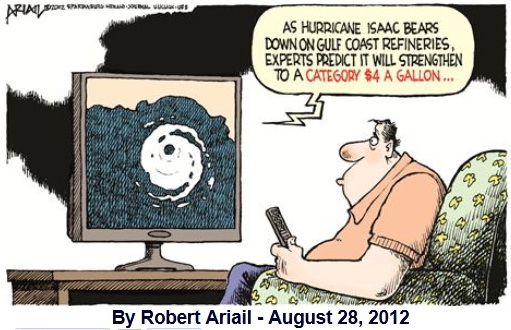 I'm thinking a 50 cent per gallon increase in gas prices would be the least of our problems if stuff gets bad.  Our best thoughts go out to our friends on the Gulf Coast.

Speaking of... there's this:

Preparing for Isaac: Airmen at Air Force bases along the Gulf Coast continued making preparations for Tropical Storm Isaac on Aug. 27 as the storm worked its way up the Gulf of Mexico towards New Orleans after having passed between southern Florida and Cuba. Eglin Air Force Base in Florida's panhandle remained in hurricane condition three as officials prepared for winds up to 52 knots and at least a foot of rain through Aug. 29. F-16s from the base were relocating to Shaw AFB, S.C., while its F-15s were headed to Seymour Johnson AFB, N.C., according to an Eglin release. However, the 19 F-35s of Eglin's F-35 schoolhouse would hunker down in hangars built to withstand hurricane-strength winds, said Eglin officials. MC-130Es from Eglin's Duke Field were evacuated to Fort Campbell, Ky., according to a Duke release. And, airmen at Hurlburt Field, which adjoins Eglin, on Aug. 26 evacuated the majority of the base's airplanes to Little Rock AFB, Ark., stated a Hurlburt release. KC-135s assigned MacDill Air Force Base near Tampa relocated to Pease ANGB, N.H., and McGhee-Tyson ANGB, Tenn., while F-22s from Tyndall AFB, Fla., on Aug. 26 moved to Sheppard AFB, Tex. Meanwhile, airmen at Keesler AFB, Miss., also remained under HURCON 3, as they prepared for Isaac, according to a base release.

That's from the Usual USAF Source.

And while we're on about things USAF... I raised my right hand and swore "... that I will support and defend the Constitution of the United States against all enemies, foreign and domestic..." 49 years ago today.  A few weeks later the lil blurb you see on the left appeared in a local SoCal rag.