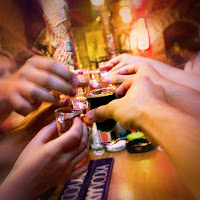 One of the newer additions on the blog-roll is the "Beer and Whiskey Bros" blog, for reasons that should be immediately... if not sooner... apparent.  So... I was reading this post this weekend and put my suggestion in the comments, for what that's worth, and it ain't worth a whole helluva lot.  But their point is well-taken: we, as Americans, don't have a "national toast," and I think we should.  My suggestion:

Ahem. “F*ck Yeah!” should be the official toast, with or without the preceding “America!” Using “America” would depend on the circumstances, of course.

That said, I almost always use the British "Cheers" when clinking glasses with friends and fam'bly (coz I'm an Anglophile of the highest order).  I've NEVER used the Irish "Slainte," nor has "à votre santé" ever crossed my lips.  Same thang for "Prosit!", but I will admit to using "Kampai!" and "Salud!" on occasion, mostly depending on present company, especially in the way-back when we lived in Nippon.

And you, Gentle Reader?  How do you toast?  Further... do you have a suggestion for a typically AMERICAN toast?