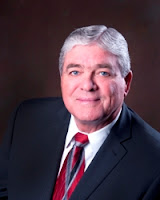 It's been quite some time since a candidate for public office knocked on my door and introduced himself for the purpose of getting acquainted and soliciting my vote.  "Quite some time," in this case means "never"... assuming memory serves.   But we ARE of an age where that's NOT a safe assumption.
Never the less, Mr. Bob Wooley, my representative to the NM state legislature, stopped by today and spent about three minutes with me, handed me a brochure, and gave me the thumbnail sketch of his biography, including the fact he's a Viet Nam vet.  When he mentioned that lil piece of information I replied "me too," at which time he said... immediately, with no hesitation at ALL... "welcome home."  Those two lil words prolly sealed the deal come election day... and the fact he's a Republican doesn't hurt, either.
―:☺:―
Another fun fact: Mr. Wooley stopped by as the coffee was brewing, meaning I hadn't poured my first cup yet.  Two thangs come to mind... (a) he had the great good sense not to bother anyone before the crack o' noon (what with me remaining abed until quite nearly 1300 hrs) and (b) thangs might not have gone nearly so well if Mr. Wooley was a member of that Donkey Party.  A door slam would have been the very BEST he would have received.
Committed to the Inter-tubes by Buck on 5/21/2012 02:19:00 PM