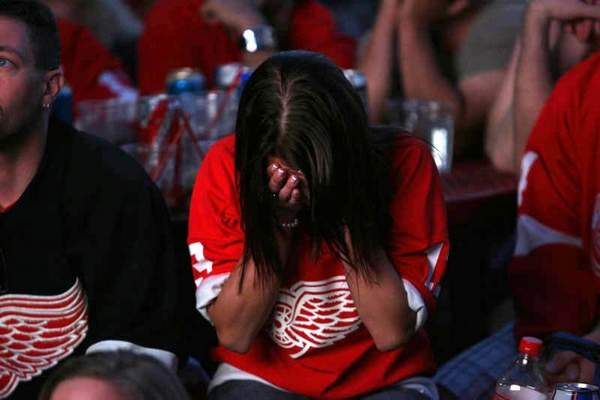 It'll be an all-too-short post season for the Wings, what with dropping back-to-back games at The Joe and going down 3-1 in the series with Nashville.  The Wings have to win the next three games... two o' which will be played in Nashville... to advance.  That's pretty much Mission Impossible, unless Pekka Rinne gets struck by lightning and half of the Preds' defense corps develops terminal cerebral palsy in the next 24 hours.

Tonight's game was ALL Wings... and all Rinne... until the  third period when Nashville took a 2-1 lead on the absolute WORST defensive play I've seen the Wings make all damned year, or mebbe even in my entire freakin' LIFE.  This:

Lidstrom, White AND Hudler all chase the puck carrier and Howard seems mesmerized, gets way the Hell out of position and leaves his net wide open.  An open net, a beautiful pass to the late man... two of 'em, take your pick... and Nashville scores the game-winning goal on a seriously BAD defensive play.  Broke my frickin' heart, they did.
Committed to the Inter-tubes by Buck on 4/17/2012 09:07:00 PM