Fading Fast With No Hope for the Immediate Future

My traffic is nose-diving and I'm pretty sure I know why... it's the playoffs and I'm simply obsessed with hockey right now.  Most people are NOT so obsessed, unfortunately, so they do what any rational reader would do when confronted with the same ol', same ol' they don't wanna read: they stop.  I tend to do the same with the purely political blogs, as in "yeah, I know Obama is an idiot, what else ya got?"  So I suppose turnabout is fair play.  That said, we DO try and mix thangs up a bit, given that we have an almost immediate grasp of the obvious... which is one of our better traits.  To no avail, apparently: 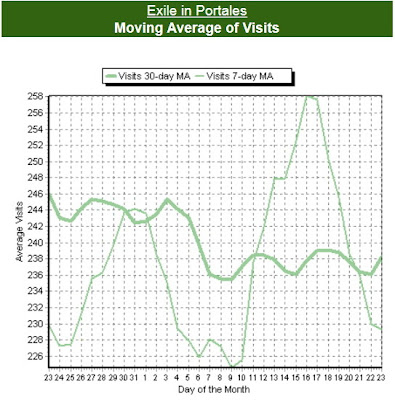 Yeah... the trend does NOT look good.
That said... it's back to the world's fastest sport.  Chicago went out last night, soundly beaten by those Feral Dogs... in Chicago!... who managed to win their first-ever playoff series since they quit bein' Jets and began new lives as desert-dwelling roadrunner chasers.  That's about it, though, as I have a feeling they'll go out in the second round.  Mike Smith has been absolutely stellar in goal but I think Rinne is better.  The Preds have a better defense corps, too, and no lack of scoring firepower.  The series WILL be interesting, assuming you like goalie duels, which I do.  I predict Nashville in six.
Methinks the other semi-final in the West is harder to predict.  Like Phoenix and Nashville, both the Kings and the Blues have exceptional goalies.  Both teams can score.  Both teams have better than adequate defenses.  I really have NO idea who'll win this one, but I'm leaning towards the Blues.
And the East?  Who cares?
So... the 2008, 2009, and 2010 Stanley Cup champions are out of the playoffs, and the 2011 champions might could be eliminated tomorrow night.  Let's hear it for parity!  Or not, depending on your point of view.
Committed to the Inter-tubes by Buck on 4/24/2012 12:58:00 PM