I threw out the remains of Christmas dinner today (see: left), which was about half of a three and a half pound brisket.  There wouldn't have been NEAR that much left under normal circumstances but I overcooked the damned thang to the point where it was tougher than a dog's chew toy.  My dinner guest, to her everlasting credit, said "it's fine" when I complained/apologized for the quality of the meat and she even went back for seconds.  The cook really appreciates that sorta thang, yanno?  Even if we know in our heart o' hearts the girl was stretching the truth a wee bit.

So... the brisket went, after one episode of reheated leftovers and one episode of homemade Reuben sammiches, the latter which weren't TOO bad, given I shredded the slices of brisket to near baby food consistency.  The veggie remnants (the best part o' that meal) were consumed in their entirety on Boxing Day.  With great relish.

I've noticed there are at least two ads currently running on the Fox News Channel for devices that prevent snoring.  What I want to know is why ALL the testimonials come from MEN.  Seriously... BOTH ads feature perky women complaining about their husbands keeping them up at night until such time as they purchased the product bein' flogged, with one particularly egregious example showing the Snoring Husband bein' banished to the couch.  I suppose wimmen don't snore in teevee land, but I'm here to tell ya that ain't true in the Real World.  I've shared a bed with a couple o' wimmen in the past that would give a Weyerhaeuser mill serious competition in the noise department... so much so that I went and slept on their couch.  Willingly.  Out o' necessity.

And then there's this in the "Not Your Father's Air Force" department: 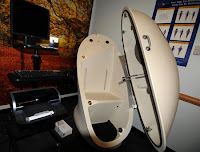 Bod Pod Battle: The 50th Space Wing at Schriever AFB, Colo., has introduced a new twist to the age-old New Year's resolution of losing weight and getting in better shape. The wing's "Bod Pod" competition will pit squadrons against each other in a battle to cut body fat. Beginning on Jan. 1, participants will have two weeks to step into the Bod Pod at the base's health and wellness center to get their body fat measured. The machine, which resembles a giant egg from the outside, uses air displacement to calculate body density and body fat. Once measured, airmen will have until late March to tone up before entering the Bod Pod once again for final measurements to determine the winners. "We really want to encourage airmen to start the New Year on the right foot by learning exactly where their body fat numbers are," said Christopher Woodruff, Schriever's HAWC health promotions educator. He added, "Body fat, when in reference to health, plays a big roll." (Schriever report by SSgt. Patrice Clarke)

Two thangs:  First and foremost, you don't need a freakin' Bod Pod (I love THAT term) to know if you're fat or if you need to get in shape; what a tremendous waste o' money that is.  Second, it's ROLE, dammit.  Don't make me come down there...

Email ThisBlogThis!Share to TwitterShare to FacebookShare to Pinterest
Labels: Food, Get Off My Lawn, Not Your Father's Air Force