The good folks at Yucca Telecom loaned me one of their 384 kbps "wireless" modems (which is actually an RF modem, but who's to quibble?) so I have a half-assed inter-tubes connection.  It's amazing how spoiled we can get... I lived with one of these modems for five years while I was waiting for fiber to be laid out to Beautiful La Hacienda Trailer Park.  I didn't like it all that much, either, as there's a big difference between a four megabit fiber connection and 384k wireless.  Just sayin', and all that.

But Hey!  Slow net is better than no net at all.

Very nice. I imagine that various wall hangings/ pictures will be gracing the walls in the future.

Well... yes and no.  We're decidedly short on suitable stuff to hang but we do have one or two thangs, this being one: 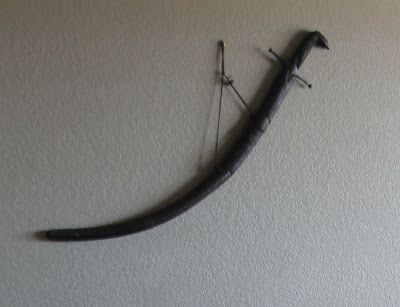 That's an 18th century Ottoman Turk cavalry sword that I inherited from my father.  Dad picked up this sword and two other blades when he was stationed in Ankara, Turkey in the late '50s.  The other two blades are a ceremonial dagger and another knife which was described as a "working" weapon, or the 18th century equivalent of a sidearm.  I don't believe he ever had any of the blades appraised, but he was informed about the history behind the stuff by the antiquities dealer from whom he bought the blades.  That's the story I got from Dad so that's the story I'm telling you, Gentle Reader.

And here's a longer view of where the sword is hung... 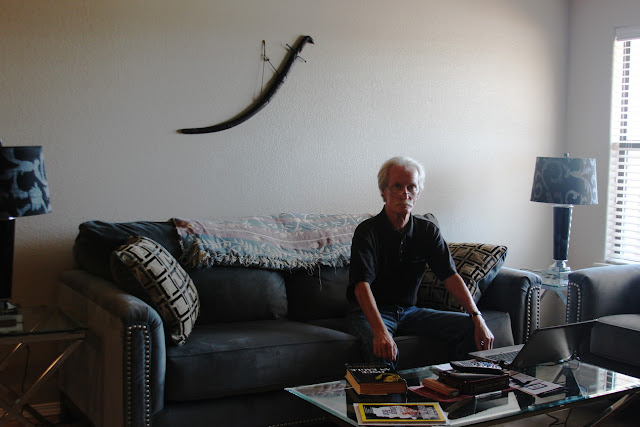 And there we are... tapping out this post on the laptop.  That's because the desktop is still in pieces, as is the whole damned office.  It's gonna be at least a week before I get that space sorted out.

I could go on and on about this move, which is still a work in progress.  Suffice to say El Casa Móvil de Pennington is all cleaned out, cleaned up, and will be moved off to storage at granddaughter Felicity's house this evening.  That particular chore was the long pole in the moving tent and I'm glad it's over.  The rest of the project is small stuff compared to cleaning and moving ECMdP.