One of the things I love about Pandora is the new artists I'm exposed to.  Mr. Brown is new to me, kinda-sorta, in the sense I don't own any of his music and only became aware of him through Pandora.  But, that said, Mr. Brown is in heavy rotation during After Dinner Whiskey Hour and I like him... a lot.  He's kind of a cross between Dylan, Leonard Cohen, and Tom Waits... which isn't as bad as that may sound.  As far as not owning any of his albums goes... I think we shall rectify that in the near future.
―:☺:―
I've written about the birds at sunset before... and even tried to capture them on video flitting about during After Dinner Whiskey Hour, with marginal success.  Beautiful La Hacienda Trailer Park is the closest thing to a bird sanctuary as it gets in these parts, mainly because we have lotsa trees on the premises and trees are a rare commodity on The High Plains o' New Mexico.  So it follows that we would have a lot of birds... and we do. 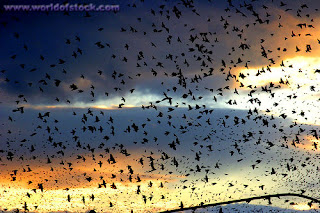 We don't have many varieties of birds... we're limited to doves, grackles, the odd crow here and there, and LOTS of little sparrow-like birds of an indistinguishable genus... well, indistinguishable to ME, anyhoo.  When I say "lots" of little birds I mean lots as in a Numbered Air Force of birds.   Watching them wheel about the sky at sunset is most entertaining and they usually assemble in squadron proportions... which is to say multiple flights of eight birds or so.  Sometimes they'll get a Wing together and pass overhead in review, 20-something of them in formation and going god-only-knows-where.  But what's REALLY impressive is when the Bird-General calls for the entire complement of the Numbered Air Force to assemble and zoom around the AOR... several hundred birds strong.  That doesn't happen often but it's a magnificent sight when it does.
Keep in mind this is a nightly occurrence... be it squadron, wing, group, individual solos, or elements of two... and it always happens at sunset.  Sigh... this is just another thing I'm gonna miss when I leave BLHTP behind and move into town.  I'm sure there will be other things to take the place of the nightly air show.  Or at least I hope there will be.
Committed to the Inter-tubes by Buck on 8/24/2011 09:25:00 PM