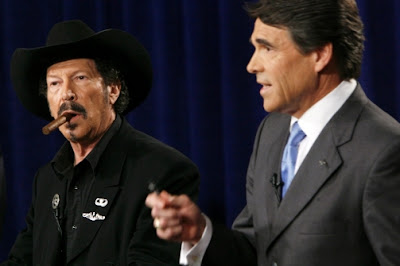 As a Jewish cowboy (or “Juusshh,” as we say in Texas), I know Rick Perry to be a true friend of Israel, like Bill Clinton and George W. before him. There exists a visceral John Wayne kinship between Israelis and Texans, and Rick Perry gets it. That’s why he’s visited Israel on many more occasions than Obama, who’s been there exactly zero times as president. If I were Obama I wouldn’t go either. His favorability rating in Israel once clocked in at 4 percent. Say what you will about the Israelis, but they are not slow out of the chute. They know who their friends are. On the topic of the Holy Land, there remains the little matter of God. God talks to televangelists, football coaches, and people in mental hospitals. Why shouldn’t he talk to Rick Perry? In the spirit of Joseph Heller, I have a covenant with God. I leave him alone and he leaves me alone. If, however, I have a big problem, I ask God for the answer. He tells Rick Perry. And Rick tells me.

Full disclosure:  I "threw away my vote" in the 2006 Texas gubernatorial race by voting for Mr. Friedman.  I could cloak myself in self-righteous virtue and tell ya I voted my conscience.  Which isn't a bad ideer, come to think on it, so, yeah:  I voted my conscience!  Kinky's platform appealed to me in every possible way...
Two things:  (1) read the whole endorsement; it's great in that Kinky way.  (2) We are edging ever closer to putting a "Perry 2012" widget in our sidebar.