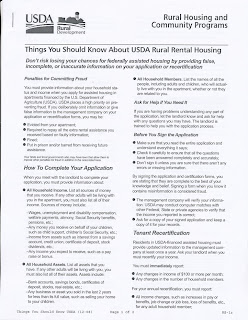 DIL Erma stopped by yesterday to drop off what you see at right... which is an application for federally-subsidized senior citizen housing.  Note my emphasis, which is the source of the post title: Dilemma.
The attractions of this senior citizen housing are strong, many, and varied.  The community comes with a good recommendation, primarily because Erma's Mom lives there and loves it.  The rent, based on a sliding scale according to income, is relatively cheap and all utilities are paid (included in the rent).  Hell, it ain't "relatively" cheap," it's damned cheap... even considering I'd have to pay the highest going rate.  The accommodations feature everything I'm looking for: space, washer/dryer hook-ups, parking, and a controlled community of like individuals.
So what's the problem, you ask?  It's that federally-subsidized thing that bothers me, mainly because it puts me in a "put up or shut up" position.  It would be pretty hypocritical of me to rail against Gub'mint Cheese if the principal part of MY diet consists of said gub'mint-provided cheese, wouldn't it?  It's bad enough that the gub'mint provides three-fourths of my current income by means of Social Security and my USAF retirement, but I can rationalize those things: I paid a LOT into the former and I earned the latter.  It would be much harder to rationalize living in subsidized housing when I can afford to live elsewhere.
So the application is still sitting there, uncompleted.  I honestly don't know if I'll fill it out, or not.  Fucking principles.
Committed to the Inter-tubes by Buck on 7/30/2011 11:33:00 AM