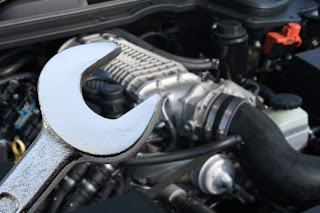 The Green Hornet and I have hit that point in our relationship.  "Buy and hold" car guys know what I mean... it's the point when one begins to weigh the cost of on-going maintenance against the cost of buying another vehicle.  I actually reached that point last year when I had my first Big Ticket repair bill, i.e., replacing the clutch.  Which wasn't as bad, dollar-wise, as our upcoming 60K mile service.  I'm getting the timing belt replaced as part of that routine service (almost exactly at the Mazda-recommended 60K mile point), replacing the shocks/struts, and various and sundry other things done as well... which may or may not include a brake job.  I'm not gonna tell ya what all that is gonna cost, Gentle Reader... it's sufficient to say I'm shaken and NOT stirred.
I received a gentle lecture from SN2 the other night about the cost of repairs at the dealership versus the all-around goodness of the DIY approach... what with SN2 being quite the car geek, complete with a well-appointed garage.  There was a point in time when I did minor maintenance myself, but that was a time when I too had a well-appointed garage with a large workbench, a hydraulic floor jack, jack stands, and the tools necessary to do this sorta work.  Times change, though, and I refuse to do this stuff in my driveway, not to mention the fact that all the foregoing support items went bye-bye in 1999's Great Goin' Out O' Bid'niz Sale.
So there's that.  It's also time for a new top; the old top only lasted ten and a half years and I'm sorely disappointed about that (heh).  Last year's stopgap re-sewing of M'Lady's bonnet worked well for nearly a year but now the rear window is starting to fall out and that cannot be repaired, beyond holding it in with duct tape... which is what I've been doin' for the better part of a month now.  So, we'll procure a new top and we are waiting for a call-back from the good folks at Craftmasters to see just how much THAT is gonna be.  We're also gonna get TGH's driver's seat reupholstered as the leather is cracking in two or three places, including an unsightly ten-inch crack in the seat's bottom cushion.  There's that, too, and it's all beginning to add up.  Still and even, we've decided to Git R Dun, as opposed to taking on a car payment.  I hope we're right.
Beer me!
Image from The Car Connection.
Committed to the Inter-tubes by Buck on 5/23/2011 02:53:00 PM

Email ThisBlogThis!Share to TwitterShare to FacebookShare to Pinterest
Labels: Cars