Yup. It's Gonna Be HARD.

The federal deficit is obscene but the states are in worse shape... which is no big secret to anyone who's been paying even the slightest bit of attention.  While California and New York garner the most attention as the poster children for the states' fiscal woes, things blew up yesterday in Wisconsin.  From the WSJ: 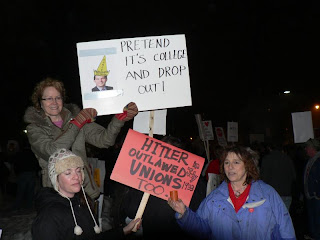 MADISON, Wis.—Democratic lawmakers fled the state in an effort to torpedo a closely watched vote on what would be the nation's first major overhaul of union laws in years, as government workers flooded the statehouse for a third day seeking to block passage of the bill.

Surrounded by thousands of tightly packed protesters, including teachers who had been encouraged by union leaders to show up in force, state senators gathered around 11 a.m. to vote on Republican Gov. Scott Walker's proposal to limit collective-bargaining rights for most state employees.

The governor's proposal, part of a bill aimed at overcoming a $137 million deficit in the current budget and a projected $3.6 billion hole in the next two years, would allow collective bargaining on wages, but not pensions and health care. Workers would be required to pay more for both. And raises would be limited to the inflation rate, unless voters approved steeper boosts.

All that sounds pretty reasonable to me... and there's more detail at the link... but not to the public employees unions, most specifically the teachers unions, who are engaged in Academy Award level histrionics worthy of a "Best Performance By Spoiled Brats" Oscar, if there were such a thing.  And they're doing so on the taxpayers dime, too, and that's the most sickening part of the whole thing.  The WSJ, again:

The drama disrupted schools across the state, as thousands of teachers called in sick to attend the protests. Public schools were closed in Madison, La Crosse, Racine and Wausau.

Patrick Gasper, a spokesman for the Wisconsin Department of Public Instruction, the state's education agency, said he didn't have a statewide tally of closures among the state's 424 school districts, which educate 872,000 students. But he said, "They're all over."

He added that some districts could have to add days at the end of the year to meet state requirements for days and hours of instruction. School officials in Milwaukee said missing work without a valid excuse would "leave teachers open to disciplinary action."

"Disciplinary action" prolly means a letter of reprimand or a similar slap on the wrist.  I'm thinking wholesale firings, a la Reagan/PATCO would be more appropriate, but that's just me.  I read elsewhere that an estimated 60% of the teachers in some Wisconsin districts called in sick in order to attend the protests.  That is nothing short of despicable and speaks to the self-serving nature of teachers unions.  But, Hey.  They're entitled, not to mention privileged.  Check out these figures:

Geographic location is another significant reason for variation in Wisconsin teaching salaries. Areas that have a higher cost of living often pay correspondingly higher salaries. Below are average annual earnings for secondary school teachers in five of the largest metropolitan areas in the state: (4)


I got those numbers from Wisconsin Teaching Salaries, via a link from Michelle Malkin.  That's pretty good money for folks who only work nine or nine and a half months out of any given year and receive benefits in excess of what private sector employees receive, yet they turn out by the thousands to protest.  On school time, no less.

Just briefly: note the civil tone of the protesters (the image I used above is NOT from the WSJ).  A lot's been said about THAT, and I'm one of mebbe thousands of bloggers on the right to post this:


So, yeah... fixing our fiscal situation is gonna be very, very difficult if this is any indication of the sort of resistance the states will face.  And you KNOW it is.  Unions,  especially public-sector unions, have most definitely outlived their usefulness and have turned into left-wing organizations who have a "Fuck you, I got mine and I'm gonna keep it" attitude.  Who'd a thunk it?

Much, much more at memeorandum.  The link contains all articles on the subject as of 2230 hrs EST Thursday evening.

Email ThisBlogThis!Share to TwitterShare to FacebookShare to Pinterest
Labels: Deficit, Playin' In the Mud, Politics