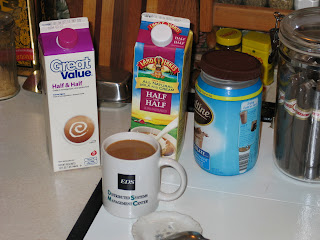 I was forced to buy the expensive brand o' half & half when I made my latest re-supply run to Wally-World earlier this week, mainly (and ONLY) because Mr. Walton's heirs were out o' the house brand.  Land O' Lakes is pretty danged proud of their flavor o' half & half, charging a dollar premium over Wal-Mart's house brand.  I often wonder how Wal-Mart manages to pull their pricing tricks off; a dollar savings on a quart of half & half is pretty danged significant... and their house brands generally undercut the pricier stuff by up to 25% across the board.
All that said, I only buy "Great Value" milk and half & half.  I won't substitute Dr. Thunder for Dr. Pepper or replace my Viva paper towels with "Great Value" paper towels that have wood chips and bark embedded in each sheet.  Nor will I eat Sam's generic soups or bread.  I'm funny like that.


―:☺:―
In other grocery news... we made a slew o' BLTs for dinner last night... frying up half a pound o' bacon in the process.  The "T" portion o' my sandwiches was pretty sad, resembling real tomatoes in only the vaguest sorta way.  I always buy Roma tomatoes this time o' year but even the Romas were the palest of red in color... more like orange, actually... and had nearly no fragrance at all.  But they were juicy, I'll give 'em that.

I suppose I should quit bitchin' and be grateful I have any produce at all in the dead o' winter, even if it's trucked up from Mexico.  Our modern logistics systems are indeed a thing o' wonder.  It wasn't all that long ago when fresh fruits and vegetables were pretty much unobtainable at any price in winter, unless you lived in the tropics.  I can remember a time in my own life when fresh produce was pretty rare... which is to say once a week, if then.  But then again, that was in Westby, Montana in the '70s... about as close to the end o' the earth as you could get in the Lower 48 at the time.
Committed to the Inter-tubes by Buck on 2/23/2011 10:13:00 AM

Email ThisBlogThis!Share to TwitterShare to FacebookShare to Pinterest
Labels: Food