"Here" in the time sense and not the geographical.  We're not looking bad on The High Plains of New Mexico (45 degrees and clear as the proverbial bell)... but the East Coast is getting its collective ass kicked: 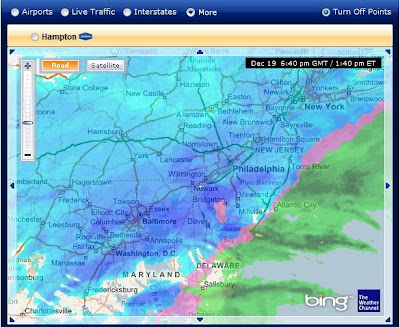 A large swath of record and dangerous December snows to reach 10 to 15 inches or more are already burying major cities in the Mid-Atlantic and will soon take aim on southeast New York and southern new England.

The heaviest snows are forecast for northern Virginia including Washington DC, Maryland including Baltimore, and the Delaware Valley including Philadelphia where one to two feet of snow are possible.

So... I've been watching The WX Channel while making the blog-rounds this morning and the weather-pundits are acting like Christmas is here a week early.  Nothing new there, of course.  Severe weather is their raison d'être, innit?
Committed to the Inter-tubes by Buck on 12/19/2009 11:54:00 AM

Email ThisBlogThis!Share to TwitterShare to FacebookShare to Pinterest
Labels: WX