Sixty-eight years ago today... "a date which will live in infamy"... the nation was shocked out of its complacency and determination to stay out of the conflict engulfing the rest of the civilized world by the horrific Japanese sneak attack on Pearl Harbor.  Here's an excerpt from President Roosevelt's speech to congress on the following day:


The men who fought back at Pearl Harbor formed the Pearl Harbor Survivor's Association about ten years after the war and they used to hold a reunion in Hawaii every five years... until 2006, when they held their last reunion there.  I published this post to mark that occasion (note that the link to the news article is dead now): 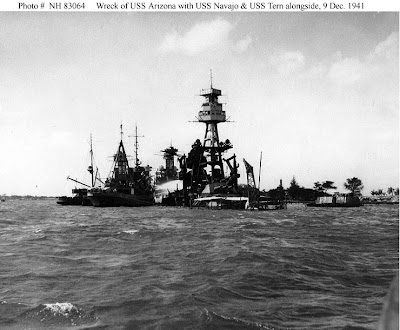 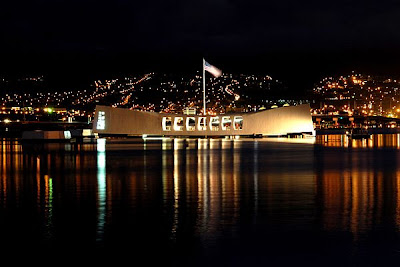 The USS Arizona - Then and Now (U.S. Navy photographs)


It’s said — quite often and by many, many people — that “changed everything.” And it is indeed true for the current generations of Americans. But I’ll submit that “changed everything” to a degree it is impossible for us who were not alive and going about our business on that Sunday in December, 1941 to realize. Those of us whose parents were members of The Greatest Generation understand my point. A smaller subset, those of us whose parents fought in World War II, understand the point a little bit better, perhaps. We have the benefit of hearing the first-person narratives of that day in December 1941, and stories from the long, long days that followed…from the dark and despair of the war’s first year to the signing of the Japanese surrender on the decks of the USS Missouri in Tokyo Bay not quite four years later. And a lot in between.

They are leaving us. The Pearl Harbor Survivors Association is holding their last meeting today.

, - With their number quickly dwindling, survivors of will gather Thursday one last time to honor those killed by the Japanese 65 years ago, and to mark a day that lives in infamy.

This will be their last visit to this watery grave to share stories, exchange smiles, find peace and salute their fallen friends. This, they say, will be their final farewell.

"This will be one to remember," said Mal Middlesworth, president of the Pearl Harbor Survivors Association. "It's going to be something that we'll cherish forever."

The survivors have met here every five years for four decades, but they're now in their 80s or 90s and are not counting on a 70th reunion. They have made every effort to report for one final roll call.

Their last meeting. I know , but it saddens me so. We owe them so much, and our thank-yous seem inadequate compared to the sacrifices they made.

But: We shall continue, we shall honor their sacrifices, we will remember, and we shall rededicate ourselves to the task that faces this generation…the one that began on . The Greatest Generation expects it from us.

The 2006 news article may not be available any longer, but the Pearl Harbor Survivors Association is still alive and kicking.  They are few now, but thank God some of those heroes are still around.  It won't be too much longer until they're all gone and as I said above: "It saddens me so."
Committed to the Inter-tubes by Buck on 12/07/2009 12:43:00 PM