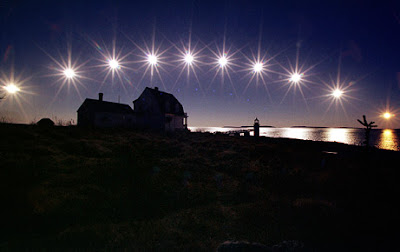 The sun, nearing winter solstice, travels low across the sky in a multiple-exposure picture made in Maine in 2002.  (photo: NatGeo)
Cool pic, eh?  So, yesterday was the Winter Solstice and it's official: we're all in winter now.  Yays, and all that.  I suppose most people in the eastern half of the country don't need an announcement to confirm winter's arrived... all that white stuff piled up in your driveways and beside the road should be enough, eh?

So... we gave some thought Sunday about an impromptu trip to Stonehenge to celebrate the solstice, knowing as we do it's a right good time and big party occasion.  The Second Mrs. Pennington and I DID think about driving down that way on the solstice (both winter and summer) when we lived in Ol' Blighty but we somehow never got around to it... and we were MUCH closer then than I am now.  And then there's the somewhat inconvenient fact my passport expired five years ago.  So:  the trip was a non-starter from the git-go.  There are home-grown alternatives to the original, like Carhenge up in Nebraska or the Cadillac Ranch... a mere two hours from where I sit.  I don't think either locations are big party sites, what with being a lil short on Druids and/or other types of pantheists, and I wasn't all that fired up for a drive... even one of only two hours duration... so we threw those alternatives to the wayside as well.
In favor of laundry.  Yep, we celebrated the solstice by doing our quarterly batch of laundry, only this time we washed about 80% of the clothes we own instead of the usual 98.2%.  Incremental improvements are a Good Thing, Gentle Reader.  Our goal is to do laundry on a monthly basis at some point in time and we're getting nearer.  Some day...

The other Good Thing about laundry these days is it's really, truly a celebration of sorts.  Daughter-in-law Erma and I sat out in her garage smoking cigars and drinking beer while her machines sloshed, thrashed, and tumbled my clothes to a clean and dry state.  We also celebrated by firing up SN1's Big-Ass Harley and letting it serenade us with its basso profundo potato-potato-potato chorus for about 20 minutes.  During which time all conversation ceased, coz that thing is LOUD.  But we digress.
Three beers and two cigars later... the laundry was done.  We moved the party...which by now included granddaughter Felicity, grandson Sean, great-granddaughter Mya, and The First Mrs. Pennington (who broomed flew in from California this past week for a visit with Erma and Family*) to Cattle Baron, a local purveyor of big-ass slabs of red meat and good beer.  And yes, we did have a generous portion of prime rib done rare accompanied by a perky pint of Fat Tire and topped off with coffee and cheesecake.  And it was good.
We went right to bed when we returned to El Casa Móvil De Pennington... and slept the sleep of the just (knowing ALL your clothes are clean will do that) until about 45 minutes ago, which explains why I'm posting at oh-dark-twenty.  But six hours of sleep is enough for anyone, eh?
* TFMP could have gone to Stonehenge, yet chose to come to Portales.   Go figure.
Committed to the Inter-tubes by Buck on 12/22/2009 02:23:00 AM