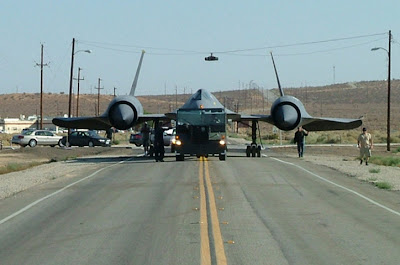 The SR-71A Blackbird that is part of the Air Force Flight Test Center Museum at Edwards AFB, Calif., is towed over public roads to the base’s corrosion control facility for refurbishment, Aug, 8, 2009. This aircraft, serial number 17955, will have its sun-damaged paint redone in time for Edwards’ air show and open house in October 2009. Air Force photo by TSgt. Trisha Winters

From the Edwards AFB web site:

Members of the 412th Maintenance Inspection Branch came out early to tow the museum aircraft.

Team Edwards members from security forces and civil engineering were on hand to make sure the SR-71's transit was unhindered by roadway obstructions and drivers who found themselves sharing the road with the world's fastest aircraft.

The SR-71, serial number 17955, left the museum's airpark to have its sun-damaged paint redone by the expert craftsmen working at the base paint shop and will be on display at the Edwards Flight Test Nation Air Show and Open House Oct. 17.

I'd have liked to have seen that!

Apropos of not much... I lived on Edwards for a short while in the way-back before moving into base housing on Boron Air Force Station sometime in 1970 or so. Not my best USAF assignment, by any means. It was HOT, Gentle Reader... but the dirt bike riding was spectacular, to say the very least.