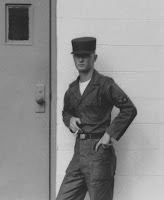 But Janis was talking about "One Good Man" when she sang that.  Me... I'm on about an anniversary.  This anniversary "ain't much" in the grand scheme of things but it IS "every little thing," to me.  It was 46 years ago today I raised my right hand and swore the following oath:

John Kennedy was president on that day, Pat Brown was the governor of California (from whence I entered service), The Ronettes' "Be My Baby" was on its way to the top of the pop charts, and I was on my way to Lackland AFB.  Martin Luther King, Jr. was still alive and well (today is also the 46th anniversary of his "I Have a Dream" speech) and Watts was yet to burn.  Vietnam was buried in the back pages of the newspapers if and when it was mentioned at all, and the Gulf of Tonkin Incident had yet to occur.  America was a much different place than it is today, yet it was still the same.
I was a much different person then, too... yet I'm still the same.  But August 28, 1963 was the watershed moment in my life.  A lot of water has gone over the dam and under the bridge since that day but I still define myself as a non-commissioned officer, even after all this time.  I find this passing strange in that I was arguably much more successful in civilian life than in the Air Force... assuming one uses responsibility, compensation, and positions in the corporate hierarchy as yardsticks.  While those civilian accomplishments were obviously important to me and to my happiness, they pale in memory and by comparison to my Air Force experiences.  Funny, that.
So... today was the day we began.  Here's how we ended: 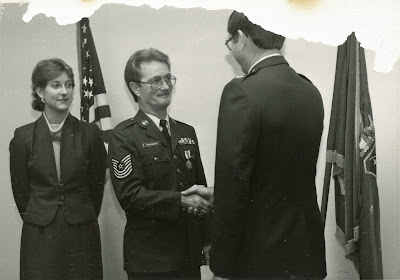 The Second Mrs. Pennington is on the left and that's my commander, Colonel Taylor, shaking my hand.  It's not a good picture, what with it being a lil ragged around the edges, but it's the best we got... sorta like my career, appropriately enough.
Committed to the Inter-tubes by Buck on 8/28/2009 01:14:00 PM