The weekend was good, although it was but a shadow compared to some folks I know (and you should know ‘em, too… great narrative AND pics of backwater , literally). We ended on a sour note (as evidenced below), but let us not dwell on the negative, especially now that we seem to be on the mend.
Lots of great hockey this past weekend, but I’ll save the amateur sporting news until (near) the end, out of deference to the great majority of you Gentle Readers who don’t give two hoots in Hell about grown men batting a frozen rubber biscuit up and down a sheet of ice for two hours, while taking the occasional break to beat the snot out of one another. Instead… let’s begin with the weekend’s excitement of another sort.
So… there I was (all USAF war stories begin this way, yanno), headed for the shower just after yesterday. The day was quite warm, the sun was out and beating down as only the New Mexico sun can, and the wind was right on the ragged edge of allowing me to put my awning down… which is to say blowing steady around 20 mph, with occasional gusts going into the Awning Red Zone. But we had the awning down, thus tempting fate in order to delay the onset of the air conditioning season. For the savings in it.
I’m standing in the shower lathering up my head when I feel the RV rock rather violently… accompanied by a noticeable and significant downdraft from the bathroom overhead vent. “No big deal,” thinks I, and I continue with the task at hand… and rather leisurely, at that. I get out of the shower, finish up the usual and customary ablutions, throw on a bare minimum of clothes, open up the bathroom door and look out my open entry door to see my awning flapping violently in the breeze… doing a dance even the late James Brown couldn’t possibly duplicate, while oscillating a good ten to 12 inches in the vertical plane. Rapidly. And at a speed sufficient to detach the whole damned thing and send it into the next county. My de-flappers had come undone, the wind had loosened up the awning struts, and we were mere minutes… if not seconds… from the whole she-bang coming undone. And now it’s time for an illustration.
Well. Pictures are worth a thousand words, as it’s said… so video must be priceless. Suffice to say all ended well. We secured the awning and proceeded to prepare for Happy Hour… which was in progress as I shot the lil vid above. We dodged a bullet there… or more like several hundreds of dollars worth of ammunition. Awnings are pricey suckers, they are.
―:☺:―
The requisite yet oh-so-brief hockey update… We now have two series going to Game Seven in the East, while in the West we have one series that looks like it might go to seven games, and one I hope goes seven games. I think the Capitals will win their series with the Rangers, after what has to be the slowest start for a supposedly hot team in recent memory. The Devils-Hurricanes series, on the other hand, is anyone’s guess. I watched the ‘Canes beat the Hell out of Marty Brodeur’s team in last evening (in between moans and groans) and I honestly can’t conclude which of these two teams deserves the win. Both are good, bordering on great. Whoever draws the winner of this series in the next round has their work cut out for them.
And the West… wow. survived Saturday night, winning in OT, to bring the series to a manageable 3-2 deficit (from the Sharks’ POV). Game Six is in tonight and I think the Ducks will prevail. has been too uneven, seems to lack motivation (go figure…), and just doesn’t seem up to the task. The Ducks, OTOH, have everything the Sharks lack, except for San Jose’s high-powered offense… which doesn’t deliver (or hasn’t up until period one of Saturday’s game… and the OT goal, of course). The Ducks also have Hiller in goal, a guy who’s been simply remarkable and is the main reason the Ducks were up 3-1 going into Saturday’s game. The man is a veritable wall in goal!
The Blackhawks can close out this evening, in . Here we have a possible elimination game and those idjits at Versus will televise the first period and then cut to the San Jose-Anaheim game, and will probably do so well before that game begins. I don’t know who’s in charge of scheduling at Versus, but I have a damned good idea where he’ll be spending the afterlife. And there ain’t no ice water there, either.
So… there’s quite a bit of speculation in Dee-troit as to which team would be the better match up in the second round… , or ? There’s a great good round-up of such talk at M-Live, if you’re into the sort of thing. I said I would keep this update short, so I’ll just excerpt what I think is the money quote from all this speculation:
I know that comment may leave you saying, "Well, what does somebody wittier, like The Chief, have to say?"
So I give you this: in hockey, you don't worry about whose ass you have to kick--you just worry about getting the details of kicking it as thoroughly as possible down pat before kicking repeatedly. Trash-talking is fun, but if you want to make sure that only you have Stanley Cup parties in June, July, and August, you worry about yourself and doing your damndest to break your opponents' bodies, wills, and spirits when that puck drops.
That's what playoff hockey is about--breaking people, and doing it well.
Yup. Ducks or Canucks… makes no difference. Bring it ON!
―:☺:― 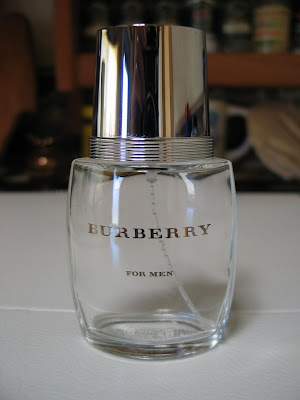 Today’s Pic: A rather nice piece of engineering, although one that’s very minor in the great grand scheme of things. There’s not a trace of fluid left in this bottle… none. And there shouldn’t be, for what the Plaid-People charge for this stuff. Yeah, I’m easily amused. Easily impressed, too. But you knew that, Gentle Reader.
Committed to the Inter-tubes by Buck on 4/27/2009 02:35:00 PM