So... we're just in from Happy Hour, which began badly but concluded on a happy note. Why the bad beginning? Well... we weren't in the mood to do a beer run all the way out to the base, so we decided to "broaden our horizons" by picking up a sixer of Santa Fe Hefeweizen while we were doing our shopping out at Wally-World, given as how we were "in the mood" for a hefeweizen. And so we picked up a sixer of these: 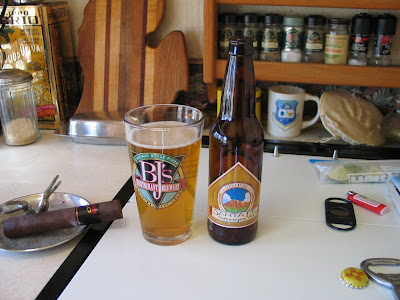 And we were NOT pleased, Gentle Reader. We drank but one of the above before we dived into what remains of the beer stock and pulled out a couple of Mothership Wits, which went down oh-so-much-better than the aforementioned "hefeweizens," which more resembles run-of-the-mill Budweiser than a hefewieizen. Truth be told... the Santa Fe Brewing Company ought be ashamed... and greatly so... for daring to append the name "hefewiezen" to this brew. This beer will remain in the fridge for a whole HELLUVA long time before it's finished. It might be suitable for foisting off on unsuspecting visitors (and non-discriminating beer drinkers) to El Casa Móvil De Pennington, but that would be about it.

The day was saved (as noted above) by pulling out two Mothership Wits. I sense there will be a beer run out to the Cannon AFB Class VI store in my most immediate future. All that said.... Happy Hour was indeed a success. We began with a soundtrack provided by Pandora... to wit, "Hot Tuna," followed up with "Motown." About which... one of the better tunes we enjoyed this afternoon:


That just HAS to be one of the songs Arthur Conley was talking about when he asked the musical question "Do you like Sweet Soul Music?" Oh, yes... indeed. Yes, we DO.